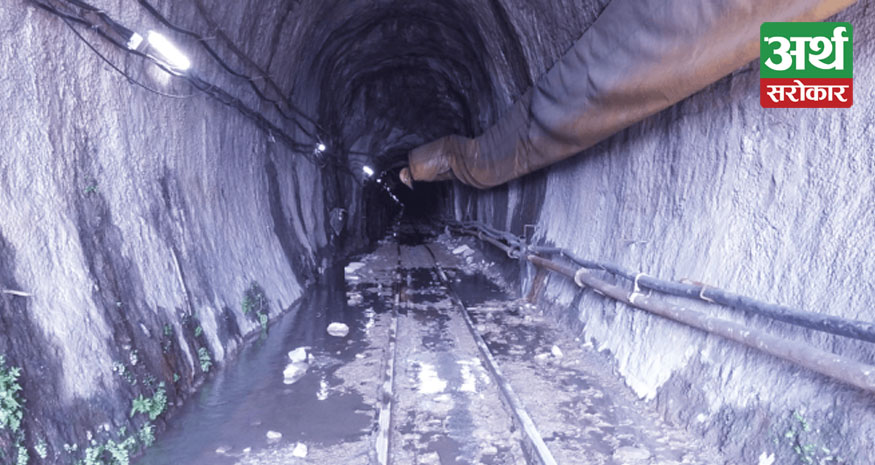 Kathmandu – Work is in progress at Sundarijal, the final point of the tunnel of the Melamchi Water Supply Project even with the passage of one month since the lockdown. Works are in progress for construction of conduits inside the project tunnel and at the exit, said Ramji Lamichhane, the engineer who oversees the project works at Sundarijal site. According to him, 28 workers are regularly at work at the site and the works are constantly being monitored and evaluated.
In this connection, Project executive director Tiresh Prasad Khatri and representatives of the construction company, Sino Hydro, and the consulting company, IPTISA, carried out an on-site monitoring of the works going on at Sundarijal on Thursday. After the monitoring, they agreed to further speed up the works. As per the agreement, the works at Sundarijal have to be completed within a month. A water treatment plant with a capacity of 85 million litres is under construction at Sundarijal. The construction of another structure with similar capacity is in the final stages. Works are being carried out with the objective of completing the treatment plan within a month.
The Project aims to pump up 177 million litres water daily from the Melamchi river in Sindhupalchok district to Sundarijal, which would be then supplied to the Kathmandu Valley. About 27 kilometres long tunnel has been constructed from Melamchi to Sundarijal. The finishing works of the tunnel are also said to be in the final stage of completion. The Project is firm in its goal of supplying water after about two months. The Melamchi Water Supply Project is a national pride project and the centre of hope of the Kathmandu denizens for resolving the acute shortage of water they had been f