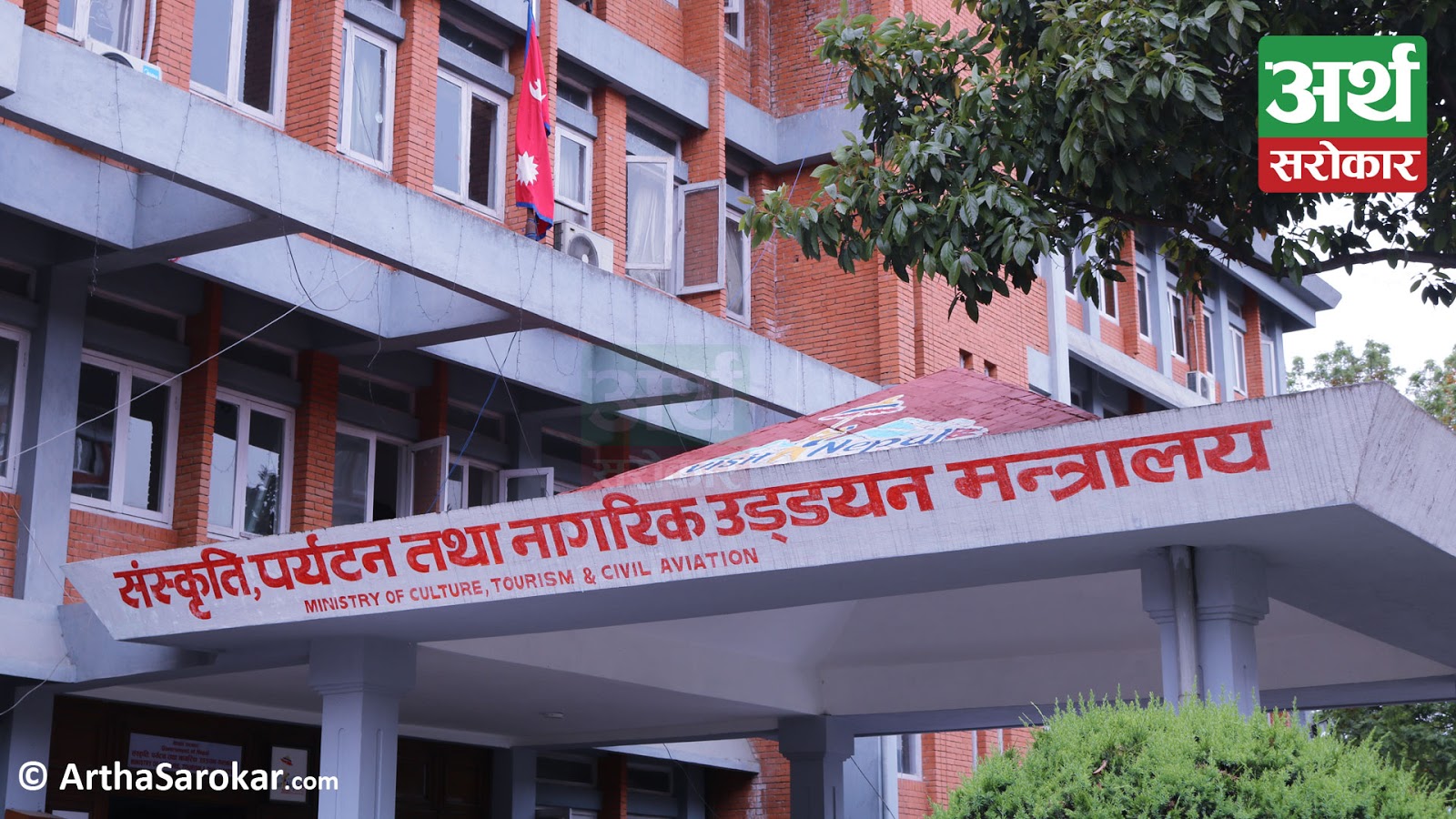 KATHMANDU.
The Ministry of Culture, Tourism and Civil Aviation has made positive progress in the last fiscal year in spite of the COVID-19 pandemic. The Ministry has made overall 60 per cent progress in the Fiscal Year 2019/20, according to the Annual Progress Report released by the Ministry here on Tuesday. It is stated that the Ministry has carried out significant works in the culture, tourism and civil aviation sectors in FY 2019/20. Likewise, extensive works have been done in policy reform and promotion of good governance. Works like inter-agency cultural conservation and promotion, construction of tourism infrastructures and reconstruction of heritages have been carried out.
Launching the Report booklet amidst a virtual meeting, Minister for Culture, Tourism and Civil Aviation, Yogesh Bhattarai said the expected level of progress could not be achieved due to the adverse situation brought about by the coronavirus pandemic when the largest capital expenditure and the financial and physical progress should have been made. “Much work could not be carried out between mid-December to mid-February and mid-June to mid-August owing to the adverse situation created by the COVID-19 global pandemic. So, the annual progress report shows capital expenditure of the Ministry is 64 per cent and the fiscal expenditure is 54 per cent while the combined overall progress is 60 per cent only. Eighty per cent progress has been made in current expenditure,” he said.
Towards the policy, the Aviation Service Authority Bill, 2077 BS and the Civil Aviation Authority of Nepal (CAAN) Bill, 2077 BS brought by the Ministry have been presented in the Federal Parliament and are under discussion. The draft of the Aviation Policy has been prepared. The total budget of the Ministry was Rs 33.13 billion in the fiscal year 2018/19 while it was Rs 21.69 billion in the fiscal year 2019/20. The annual report of the Ministry mentioned that the average expenditure was 81 per cent in the fiscal year 2018/19 while it was 49 per cent in the fiscal year 2019/20.
Overall budget expenditure has been decreased as the budget expenditure towards fiscal management is less as amount has not been spent even after allocating a huge quantity of amount in the second international airport as well as lack of payment of amount of Gautam Buddha International Airport. According to the Ministry, the expenditure has been affected due to coronavirus pandemic. Coronavirus pandemic has adversely affected the tourism sector of Nepal at a time when budget had to be spent for tourism activities of the ministry and subordinate bodies. Direct impact of coronavirus pandemic was seen in implementation of Ministry’s annual plan programme. However, notable progress has been seen in national pride projects under the Ministry during the pandemic. Pashupati Area Development Trust has made 70 per cent progress, Lumbini Development Trust 95 per cent, under construction Gautam Buddha International Airport 85 per cent and Pokhara Regional International Airport 61 per cent.
Construction activities of Pokhara and Gautam Buddha airports was continued even in coronavirus pandemic. Minister Bhattarai said that only the task of installing lights and some equipment is remaining at Gautam Buddha International Airport and the airport could come into operation commercially within three to six months. Construction of 453 heritage buildings affected by the earthquake has been completed so far. The 22-storey Sundhara is under speedy construction with completion of its 11 stories. Construction of Rani Pokhari has reached its final stage, said Tourism Minister Bhattarai. The 127 kilometres Great Himalayan Trail has completed the construction of 77-kilometer trail.
Of 192 tourist destinations proposed to be managed, construction of infrastructures for 122 destinations has completed and 70 destinations have reached 50 per cent completion. Counting of 60,000 trees spanning 19 hectares to be chopped for the Nijgadh International Airport has been done. The Nepal Airlines Corporation (NAC) has a net property worth Rs 54.1 billion and it has suffered Rs 45.9 billion debt. The national flag carrier has started direct flights to Narita in Japan. Preparations were underway to operate flights to Riyadh in Saudi Arabia, Seoul of South Korea and Guangzhou in China after the end of COVID-19 pandemic, said an official of the NAC. Suggestions have been sought from the Finance Minister to manage Chinese aircraft the NAC has, said the minister, adding that the process has moved ahead for the NAC to add aircraft to operate domestic and international flights.