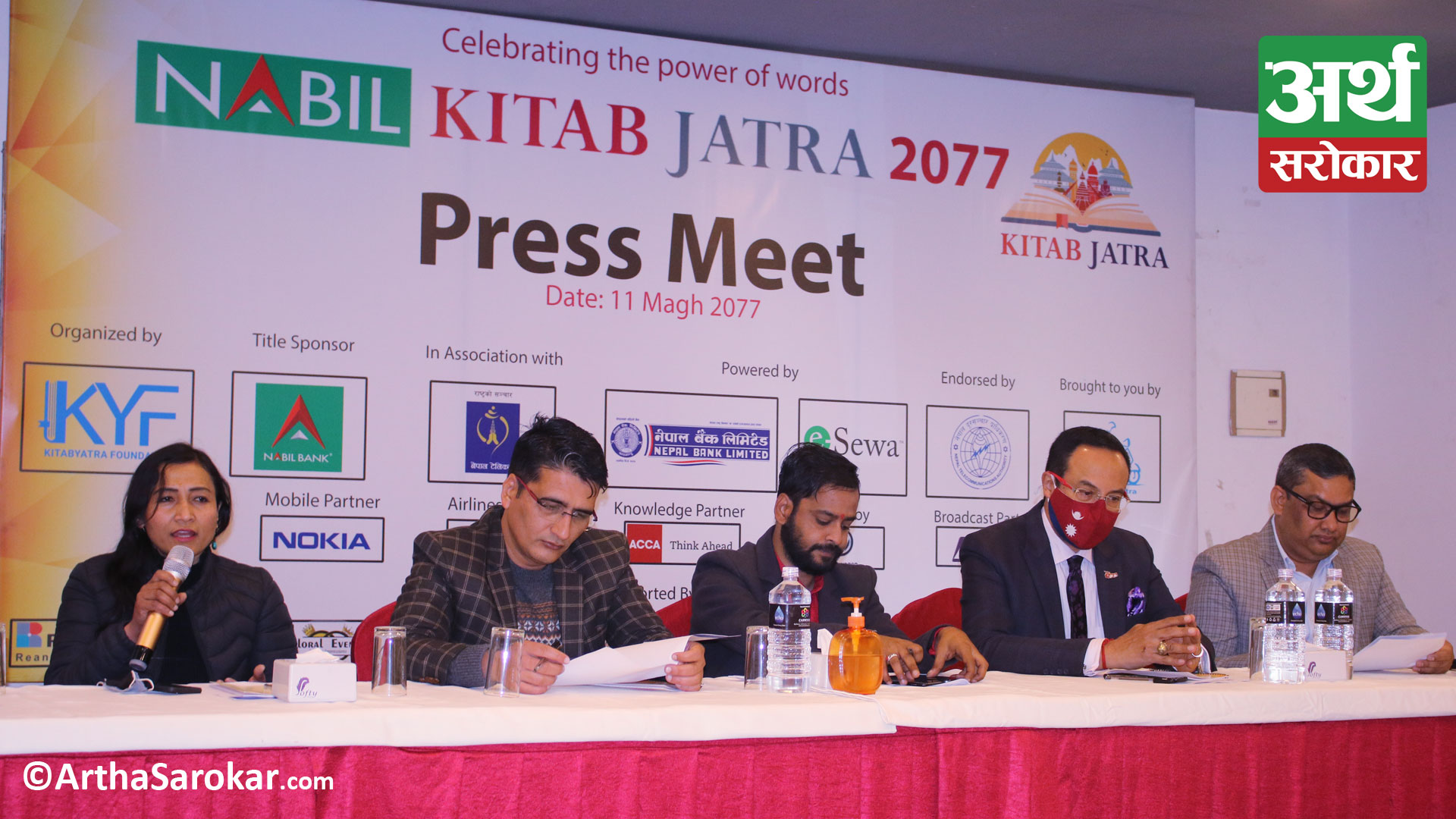 KATHMANDU
The annual ‘Kitab Jatra’ organized by the ‘Kitab Yatra Foundation’ will be held from 30th January to 5th Febtuary this year. The foundation held a press meet at the Carnival Restaurant and Meetings in Thapagaon on Sunday. The book fair will last for a week.This year, the book fair will focus virtually through mass media . It will be done through media ‘, the chairman of the foundation and the festival director of ‘Nabil Kitab Jatra-2077 ‘. Rishi Ram Adhikari said, ‘For that, AP One HD Television and Kitab Yatra.com’s Kitab Yatra Collaborated with the app. ‘According to him, every day from 6 pm to 7 pm on January 30 and from 5 pm to 7 pm on the last day The ‘Kitab Jatra’ can be viewed through the mentioned medium till noon.
In the same context, from Kitab Yatra.com in Nepal he said that one can also get information about the available books and buy them. Anil Keshari, Chief Executive Officer of Nabil Bank Ltd., the title sponsor of ‘Kitab Jatra’ at the press meet said, ‘they did not remember yesterday, they saw ‘Kitab Jatra’ as a procession to be seen tomorrow. Of the book he argued that since power is so important, the celebration associated with it would connect with the future.Our country is culturally rich. Other pilgrimages with ancient myths are connected with religion. He connects us to the past. But the book journey is tomorrow. It is a journey to connect with the next generation’. As it is not possible to become a full citizen without study, such festivals will lead to that He said. Nepal Bank’s ‘Nabil Kitab Jatra-2077’ to be held in association with Nepal Telecome and e-sewa have collaborated. Tikaram Yatri, Editor-in-Chief of AP one HD Television, Broadcast Partner of Nabil Kitab Jatra-2077.
Stating that holiness is related to the word Jatra, he said that the festival connects knowledge with holiness.Of knowledge from exchange he emphasized on the need to update and diversify the medium of dissemination as the dissemination would be intensified was ‘Such discussions can be connected to a large number of viewers at once through television. To him with this in mind, we have collaborated with Kitab-Jatra this year, ”he said we believe it will help to expand effectively. ‘He is climbing the ladder of every person’s life-development letter, so with every person of such celebration mentioned emotional relationship.
Speaking at the Press Meet, Bharat Rijal, Chief Advisor and Senior Chartered Accountant of Kitab JatraEmphasis on the need to continue such a journey as building a society will have a positive impact on the development of every sector Given Speaking on behalf of the moderator of the discussion session of ‘Nabil Kitab Jatra-2077’, poet Shakuntala Joshi she said, ‘such festivals play an important role in connecting literature with the life of the common man’.
‘Kitab Jatra’ organized by the foundation established with the objective of making reading culture an integral part of people’s lives. This is the third edition of Jatra. It involves interactions between personalities from different walks of life. This year 7 sessions, special poetic, including personalities from different fields including language, literature, cinema, society, enterprise The festival will have seven sessions with performances as well as other events as well as other events of various natures Coordinator Kala Anuragi said.
Likewise, on this occasion, special contribution will be made to the person who has made special contribution in the field of Nepali literature every year He informed that ‘Prem Sahitya Samman’ will also be announced. Honors to be given with cash from Sarlahi district Late Shikshasevi. It has been established in the memory of Prem Prasad Adhikari. He is the founding president of the foundation Rishi Ram is the father of Adhikari.
Last year’s Prem Sahitya Samman Sahitya Sadhak Sarubhakta was given Rs. 55,555 was provided . Similarly, online with the aim of making it easier for every citizen to read books Kitab Yatra Pvt. Ltd., which operates the book-selling platform Kitab Yatra.com, has launched Kitab Jatra. On the occasion, the best-selling book from its platform will be given the ‘Kitab Yatra Best Seller Award’.The award was received last year by narrator Amar Neupane’s ‘Gulabi Umer’. Both honors and awards Anuragi said that the announcement will be made on the last day of ‘Kitab Jatra’. 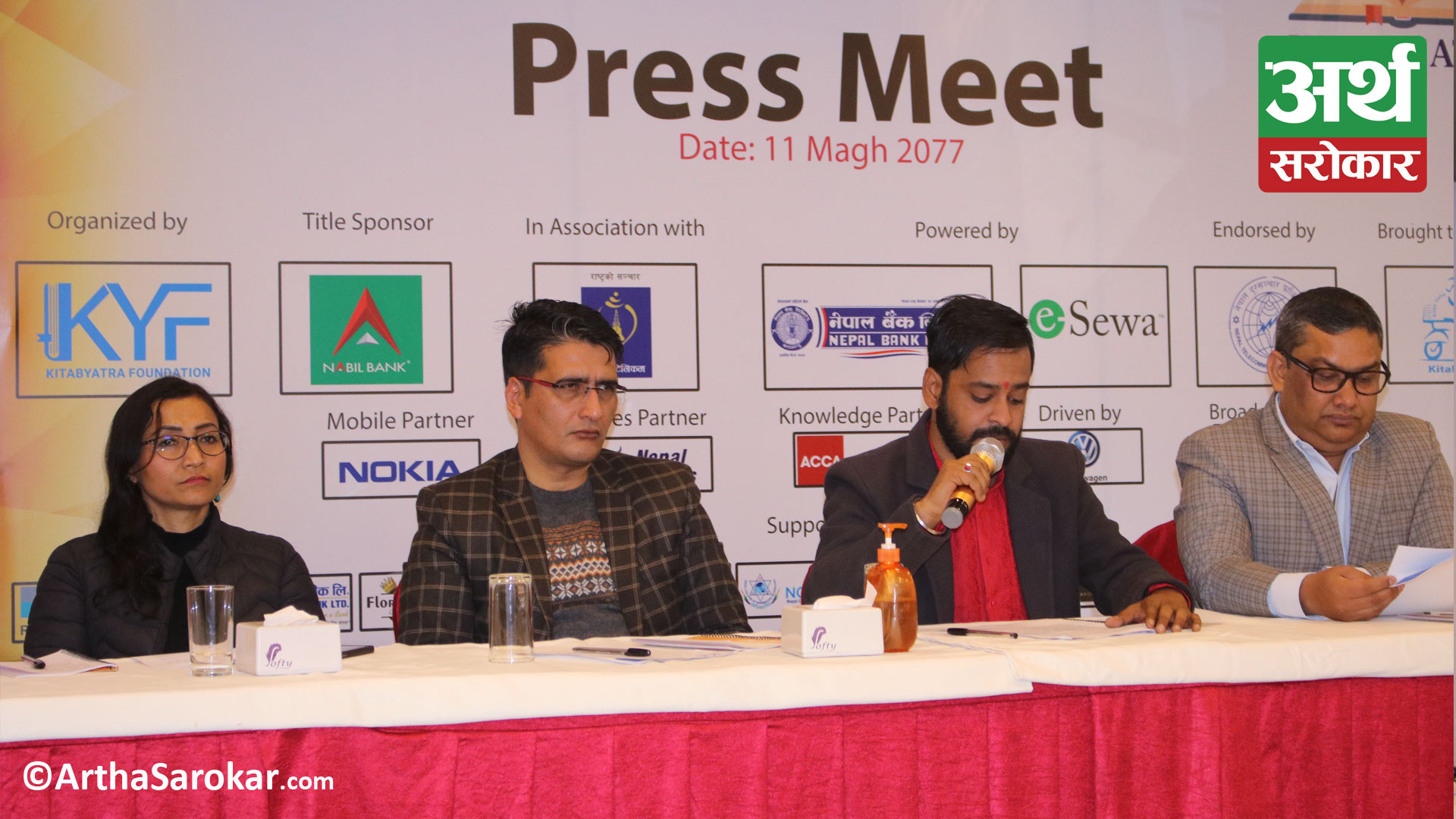 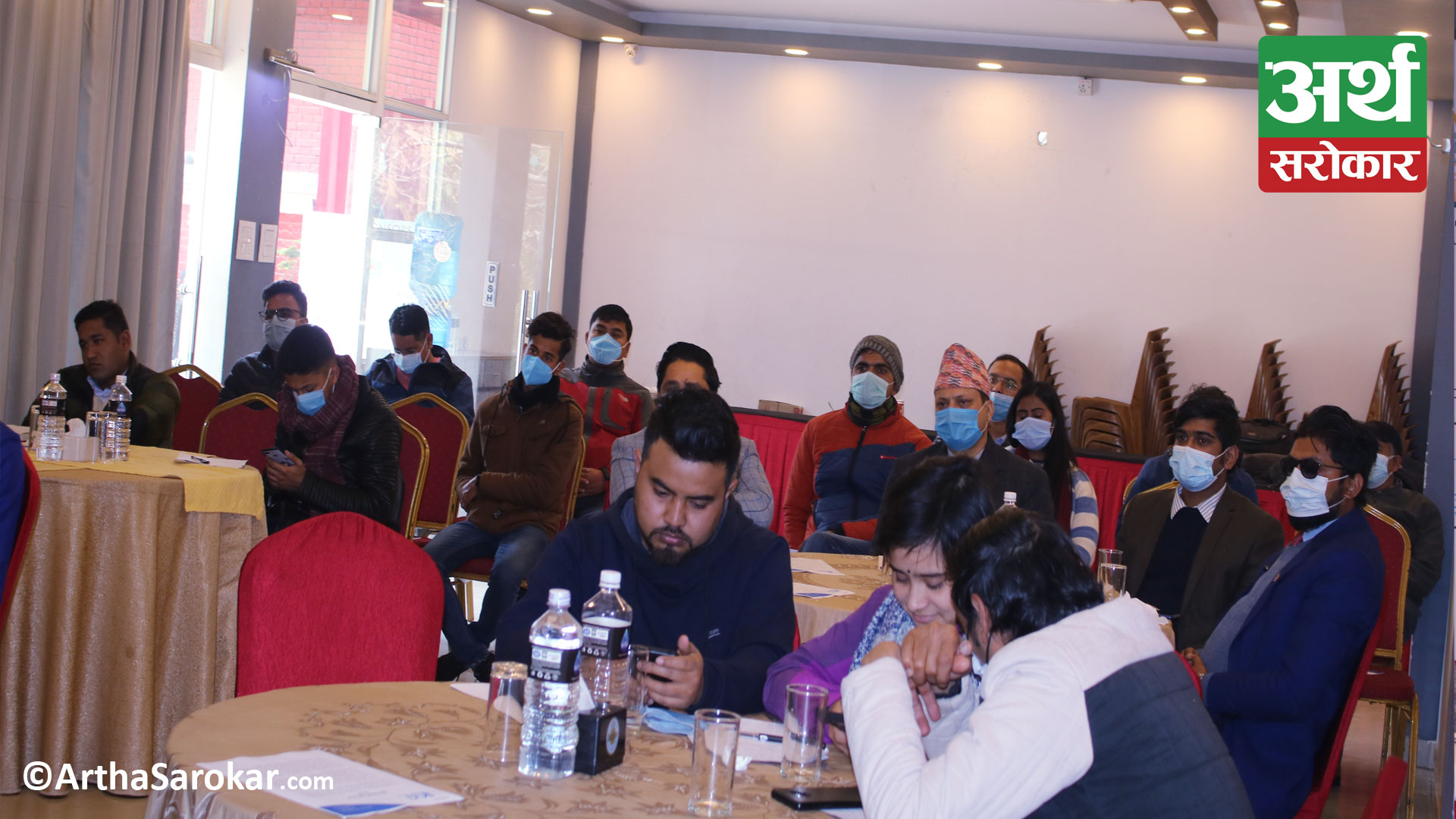 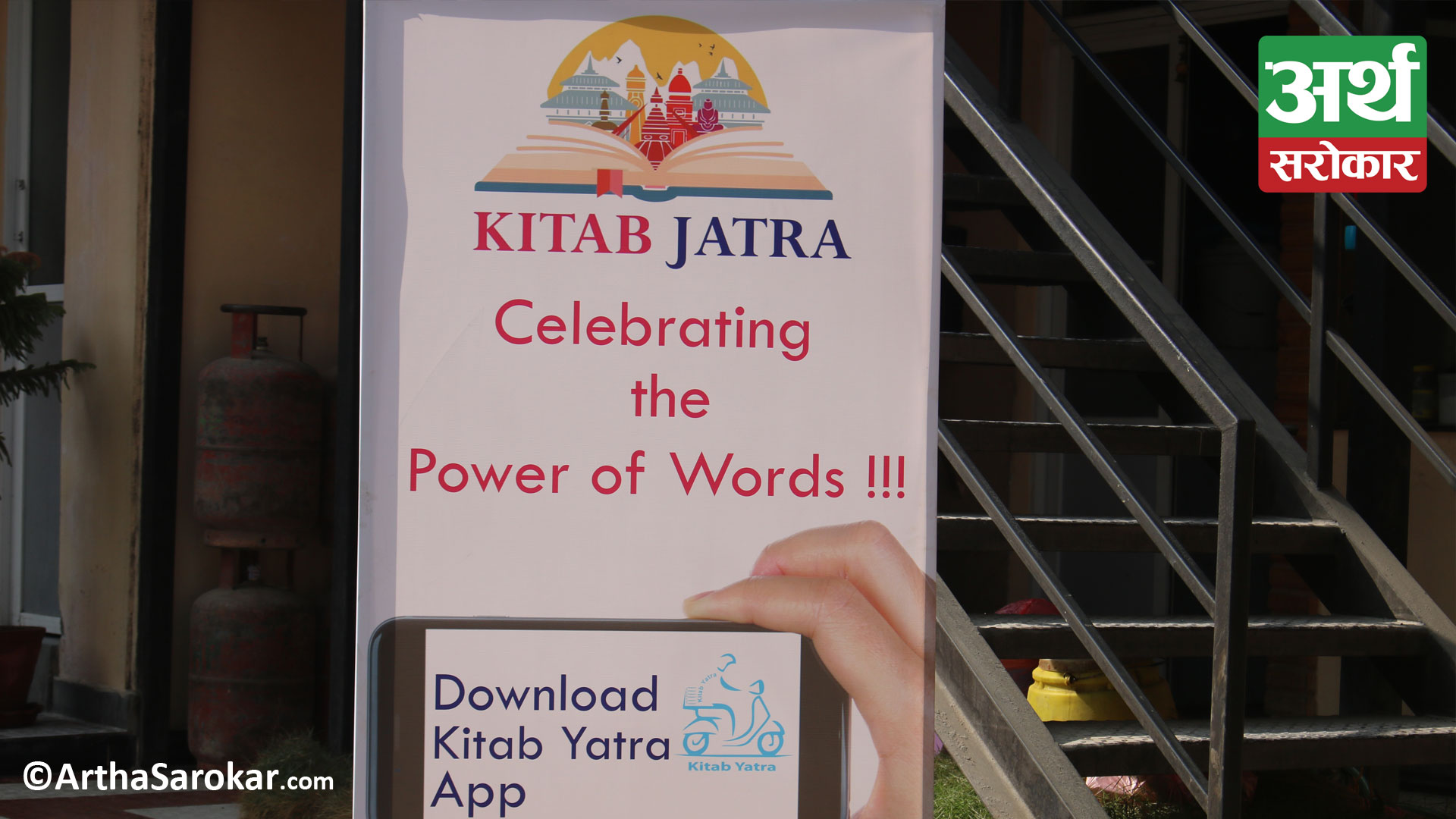 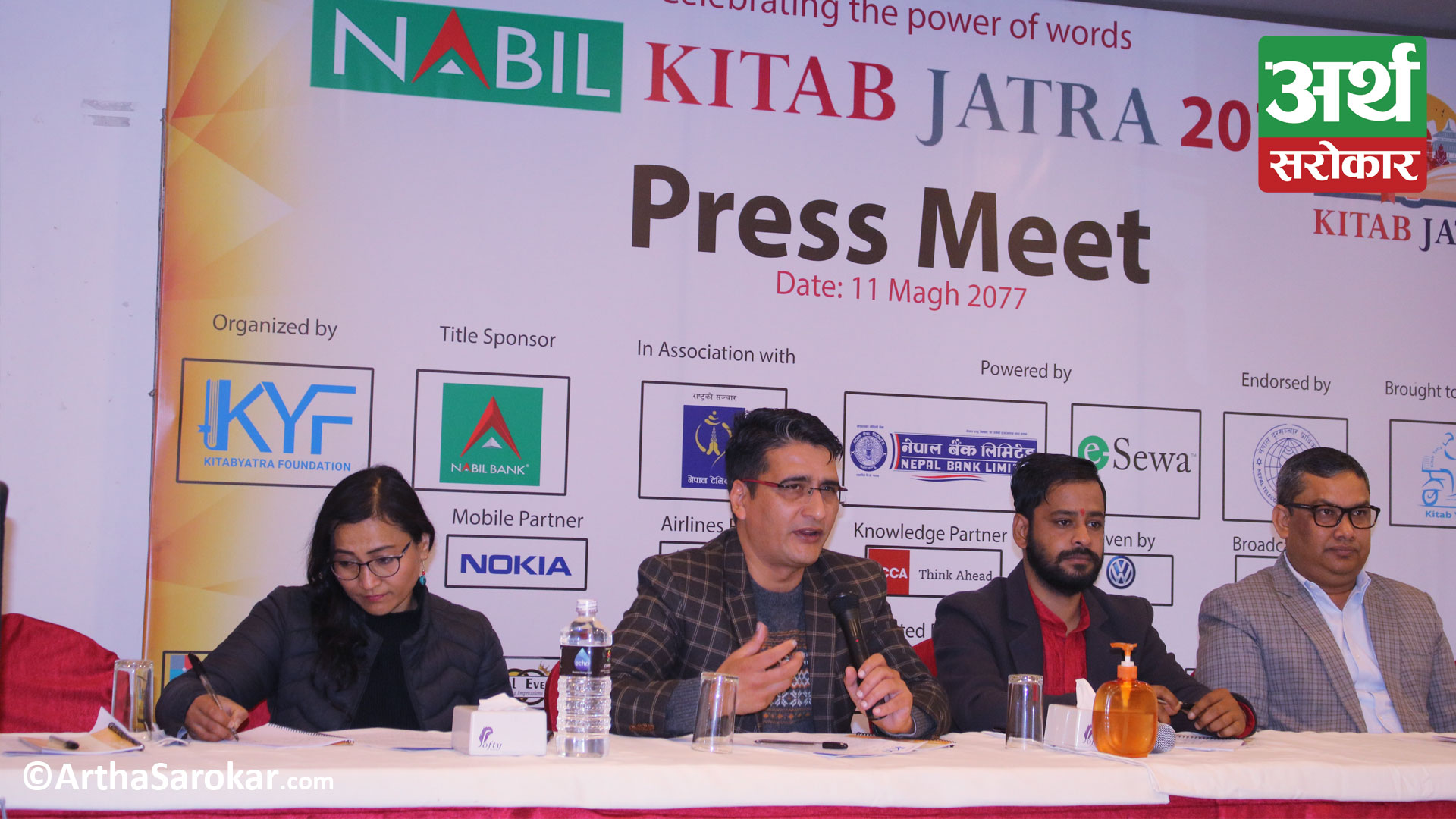 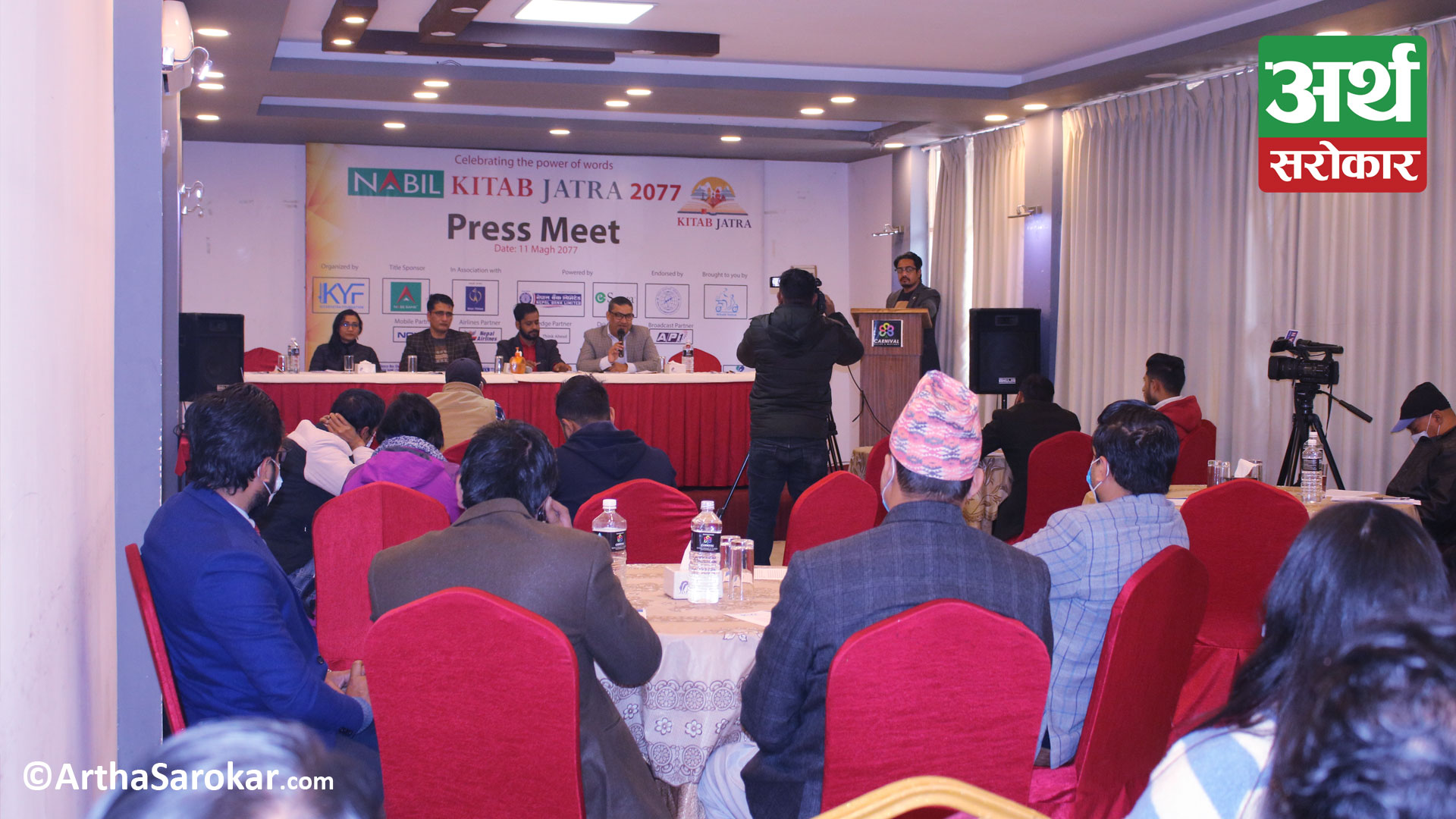