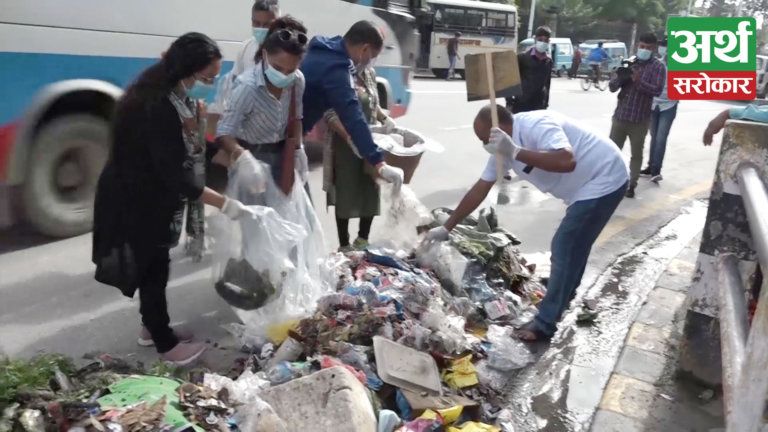 The Kathmandu Metropolitan City (KMC) is to collect garbage of Kathmandu Valley from Wednesday. Garbage collection task was halted for the past two weeks. A meeting held under coordination of KMC Mayor Bidhya Sundar Shakya in presence of Chief District Officer of Kathmandu, Kali Prasad Rijal, Director General of Department of Roads, senior superintendent of Police, among others took the decision in this regard. Solid waste has been thrown and piled up in different parts of the city which has turned Kathmandu Valley into a dirty and stinky capital. Garbage has been found thrown haphazardly everywhere including on road, river bank and squares. Saying it was not only the responsibility of KMC to manage the garbage, Mayor Shakya stressed it is the responsibility of all. He said support of all bodies was expected for positive resolution of this problem.

Chief of Environment Department of KMC, Hari Kumar Shrestha, said that a decision was taken to carry out repair and maintenance of the road to Sisdole landfill site immediately by the Department of Roads. He further said that problems of locals of Sisdole would also be resolved. “The home administration will make arrangement of peace and security if challenge is surfaced in course of collecting garbage and its management.” There would be coordination between the District Administration Office, Nuwakot, and Kathmandu, for the same, mentioned Shrestha. Meanwhile, the Urban Development Ministry said the disposal of waste in the under-construction Bancharedanda seemed possib