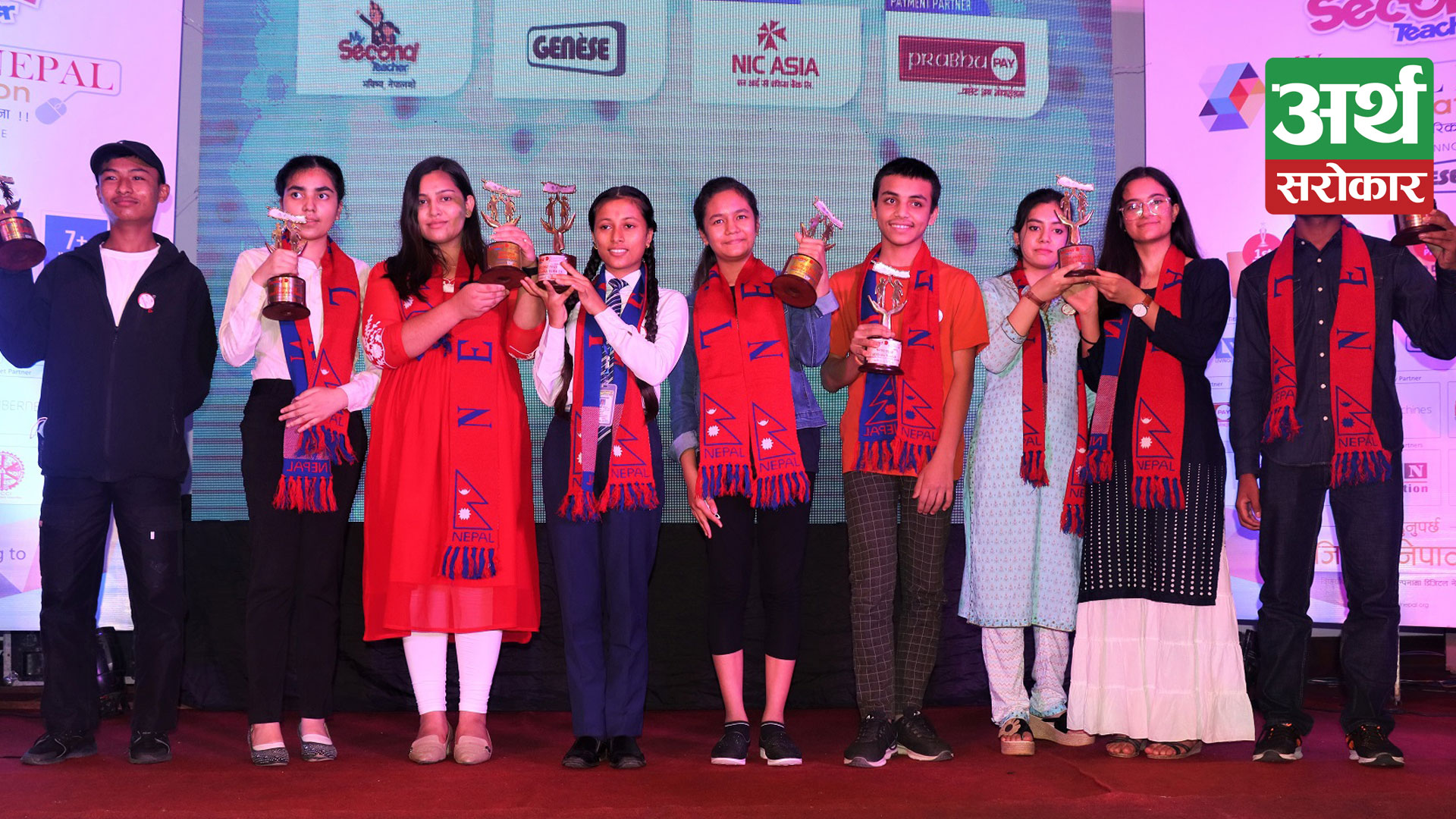 The winners of the My Second Teacher ‘My Digital Nepal, My Vision’ competition organized by Living ICT has been announced.Prizes have been awarded to the winners at a special event held at the Soaltee Hotel on Friday. Neha Giri, a class 12 student of St. Xavier’s College, Maitighar, bagged the first prize in the competition. She won one lakh rupees for creating the best composition in the essay competition titled ‘My Digital Nepal, My Imagination’. Prashna Subedi, who is currently studying in grade 10 at Banglamukhi Radhakrishna Tharu Higher Secondary School, Guleriya-6, Bardiya, and Rythm Bhetwal, who has just given SEE this year from Ratna Rajya Secondary School, Baneshwor, secured the second place.

Prashna had written a poem titled ‘Fulfill My Dream: Of Digital Nepal’ while Rythm had written an essay titled ‘Digital Nepal of My Dream’. They have each received the amount of 50,000 as the  cash prize. Four students who achieved third position in the competition are Asim Dangol who has given SEE from Mankamana Secondary School, Birtamod, Jhapa, Anish Shrestha from Tri-Padma Vidyashram Secondary School, Pulchowk, Lalitpur, Uddhav Thakur who is currently studying in grade 10 in Budhanilkantha School, Kathmandu and Bishestha Chaudhary from Brihaspati Vidyasadan respectively. Asim had written a poem titled ‘Digital Nepal: A Dream’ while Anish had made a video presentation titled ‘Beautiful, peaceful, great, digital Nepal of my imagination’. Similarly, Uddhav wrote an essay titled ‘Way to Digital Nepal’ and Bishestha Chaudhary had made an art on the theme of ‘My Digital Nepal’.

Similarly, a group of students had prepared a framework titled ‘Digital and Prosperous Nepal’ in the competition. Prashanna Kumar Regmi, Shashank Neupane, Arya Prasai and Amim Singh of Kathmandu Model Secondary School, Bagbazar have been awarded the Special Mention Award by the Evaluation Panel for their valuable contribution to this framework. They have won a special prize of Rs 51 thousand 1 hundred and 51. In addition, to this the winner will also receive some attractive offers from the sponsoring companies. Dish home has given a special gift of one year internet to all the winners and top sponsor ‘My Second Teacher’ has given some great gift hamper to all of the winners.

For the very first time in Nepal, the younger generation was invited to participate in the competition titled ‘My Digital Nepal, My Vision’ with the objective of making the younger generation aware about information and communication technology. In the competition, more than 350 thoughts and ideas were received through essays, poems, articles, pictures, speeches, video presentations etc. An 11-member evaluation committee was formed to select the best from more than 350 participants in the competition. The members of the evaluation committee evaluated each composition and shortlisted it. Prizes have been distributed to the best eight compositions through many tedious process performed by the evaluation committee.

The winners were announced by Tara Devi Bhatt, Member of the National Assembly and Chairperson of the Committee on Sustainable Development and Good Governance, Mahendra Man Gurung, Chief Information Commissioner; Baikuntha Aryal, Secretary at the Ministry of Education and Science Technology; Suresh Acharya and former Minister Ganesh Shah and some other valuable guests. Addressing a special function organized today, Chief Guest Tara Devi Bhatta said that the children’s ideas would inspire the government to make the Digital Nepal campaign even more meaningful. She said that the new generation of students has a lot of knowledge about Digital Nepal and it has the ability to teach even the older generation.

Similarly, Secretary of the Ministry of Communication and Information Technology Dr. Baikuntha Aryal said that there should be participation and co-operation from all the quarters for the proper implementation of the digital framework brought out by the Government of Nepal. “Implementing the Digital Nepal Framework is thought to be the sole responsibility of the Ministry of Information and Communication Technology, but it is not,” he stated.

Secretary at the Ministry of Education, Science and Technology, Suresh Acharya, said that education and technology should be linked for the development of information and communication technology sector in Nepal. Birendra Mishra, coordinator of the committee, said that the best ones were selected after 5 different rounds of selection. Mishra said, “We got a lot of great thoughts and ideas from different genres. After many rounds of selection, we chose the best eight, but there were many other better designs and ideas as well.”

Manohar Bhattarai, an information and communication expert and advisor of the competition, said that it has taken a lot of time and effort to create a digital framework for Nepal, adding that it will be implemented gradually. He said that this framework covers a lot of things, some of which may be missing, adding that it needs to be further refined. “My Digital Nepal My Vision program has helped thousands of students in closed rooms to think, study and awaken the government and stakeholders to make tomorrow a prosperous Nepal,” said Razan Lamsal, chairman of the organizing committee.

Organized by Living with ICT, the event has My Second Teacher as the main sponsor, Genesse Solutions as the powered by partner, NIC Asia Bank as the banking partner, Prabhu Pay as the payment partner, ACCA as the knowledge partner, Fuse Machines as the technology partner and Dishhome Fibernet as the internet partner respectively. Similarly, the Government of Nepal, Ministry of Communications and Information Technology, Nepal Telecommunication Authority, Federation of Nepalese Chambers of Commerce and Industry, CAN Federation, Pabson, Women in IT, Nepali Patro, ICT Samachar and others provided the support as well . The best works and thoughts of the students will be published in Living with ICT Magazine as well as ICT Samachar.com respectively.