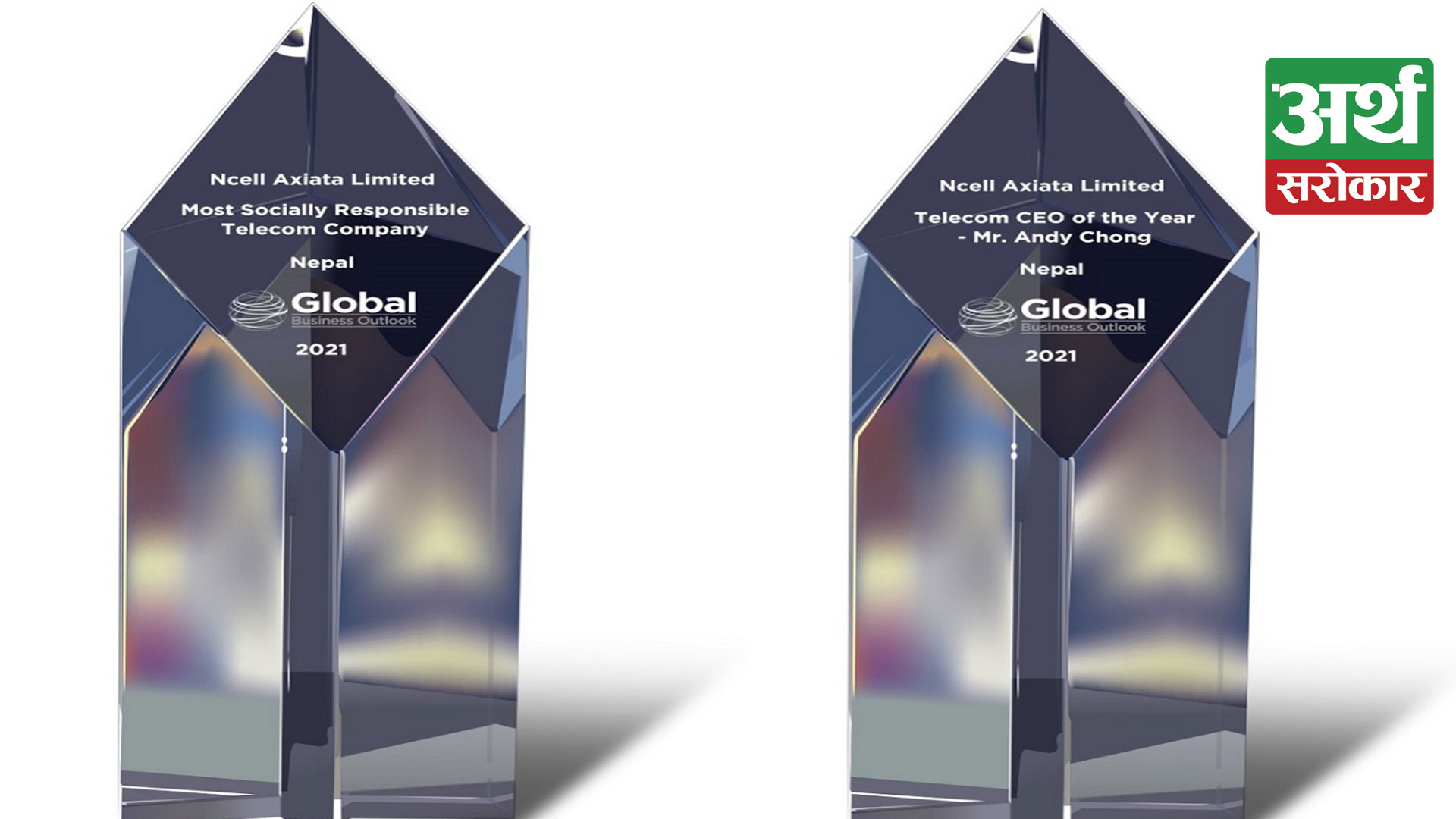 Ncell Axiata Limited (previously Ncell Private Limited) has written Nepal’s name in the global business and technology map winning two prestigious awards at the Global Business Outlook (GBO) Awards 2021. Ncell has been recognized as the ‘Most Socially Responsible Telecom Company’ in the telecommunications category, and its CEO Andy Chong has been named the ‘Telecom CEO of the Year’ under the leadership category of the GBO Awards.

The London-based publication’s GBO Awards seeks to recognise and reward excellence in businesses around the world. The awards are designed to facilitate the outstanding work of businesses and business leaders across industries including banking, finance, real estate, telecom and aviation among others. Companies are awarded for demonstrating advanced levels of creativity and innovation and their contribution to value creation at a local, regional, and international level.

Ncell has also been officially shortlisted for two separate awards under the category of ‘The Social Contribution Award’ and ‘Crisis Response Award’ at the World Communications Awards (WCA) 2021. The winners will be announced at this year’s Total Telecom Congress event on 26-27 October 2021 in London. WCA has recognised innovation and excellence for global telecoms and today continue to be the most revered mark of achievement in the industry. Similarly, Ncell has been shortlisted for the Global Carrier Awards (GCA) 2021 for migrant outreach campaigns under ‘Best Social Media Campaign’. Final winner will be announced on 20 October 2021 at GCA 2021 event in London.

In accepting the GBO Awards for ‘Most Socially Responsible Company’, ‘Telecom CEO of the Year, Andy Chong, CEO of Ncell expressed his gratitude on receiving the awards. “We are honored by this global recognition on how we have made significant contributions in the community where we operate as a responsible corporate citizen. With focus in major areas including education, health and environment that support Nepal in development and achieving SDGs, we have so far invested over Rs. 1.40 billion in social projects and our commitment to sustainability is ingrained in our DNA,” he said. Furthermore, he added, “Our achievements are shaped by the strength of the foundations we have put in place, and I would like to thank our employees for their commitment to excellence.”

Chong’s focus on doing the right thing has brought exemplary impacts in terms of social contributions by Ncell. As a responsible corporate entity, Ncell has been driving CSR not because of legal obligations, but because it is our moral responsibility. Chong was appointed CEO/MD of Ncell in November 2019. He is a passionate, visionary, and strategic leader, who holds more than 30 years’ management and operations experience in diverse industries, namely, telecommunications, IT/technology and electronics. Amidst the risk of the COVID-19, he has been according high priority to ensuring the health and wellbeing of our customers, partners, and employees and playing a role in supporting the government.

The recognition of Telecom CEO of the Year reflects his leadership in building an empathetic culture at Ncell. He inspires and motivates employees setting out a clear vision; giving employees a sense of purpose, why they want to come to work, and pursue a mission. Under his able leadership, digitalization has been one of Ncell’s major focus areas driving the company strategically to becoming more resilient and aspiring to be a digital service operator by 2025. As per the commitment of the company to bringing advance & innovative services, he has enabled VoLTE and delivery of much deeper indoor coverage and wider coverage of 4G with LTE900MHz to ensure high quality, modern and cost-effective service, creating value for customers and partners.

Chong has been focusing on people development at Ncell too, emphasizing on systematic and extensive programs being aligned with Axiata’s belief on people development, not just for our businesses but also as part of getting the best out of the employees. In terms of best practices, he has supported the implementation of best practices in specific areas we refer to as the ‘Collective Brain’, where teams at both group and local level define collectively what’s best for the company.

A seasoned professional, Chong has held CEO and top management positions in Malaysia, Singapore and Indonesia, where he led teams to build and grow businesses and in providing strategic direction in the areas of sales & marketing, technical & operations and finance. He joined Axiata Group in 2008 and held the position of SVP & Head of Group Marketing & Operations until 2014 before joining Axiata in 2016 as Interim Chief Commercial Officer for Ncell. In January 2018, Andy again re-joined Ncell as Chief Commercial Officer (CCO) before assuming the role of CEO/MD for Ncell In November 2019. Chong holds a Bachelor of Engineering (Electronic & Computer Systems) and MBA (General Management), both from Monash University, Australia.