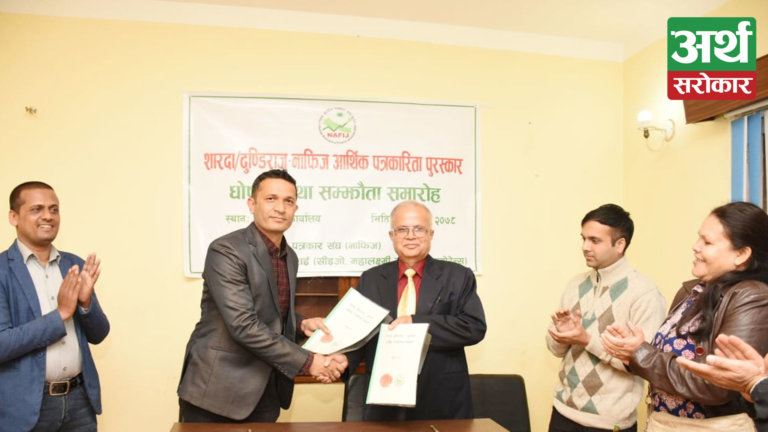 The Nepalese Association of Financial Journalists (NAFIJ) has announced an economic journalism award with a purse of Rs 100 thousand. NAFIJ announced the institution of this award in collaboration with Ramesh Kumar Bhattarai, an expert on banking and insurance.
He is currently the chief executive officer of Mahalaxmi Life Insurance. Bhattarai said he announced the award in partnership with NAFIJ as a respect to his mother and father. He said he would be providing the money for operating the revolving fund for the award to NAFIJ.
NAFIJ will hand the prize named as ‘Sharadadevi-Dhundiraj Bhattarai- NAFIJ Economic Journalism Award’ to a journalist every year on the occasion of its anniversary. As per the agreement, Bhattarai handed a check for one million rupees to NAFIJ for management of the resource for the award. NAFIJ president Modnath Dhakal and Bhattarai today signed a MoU regarding establishment of the award.