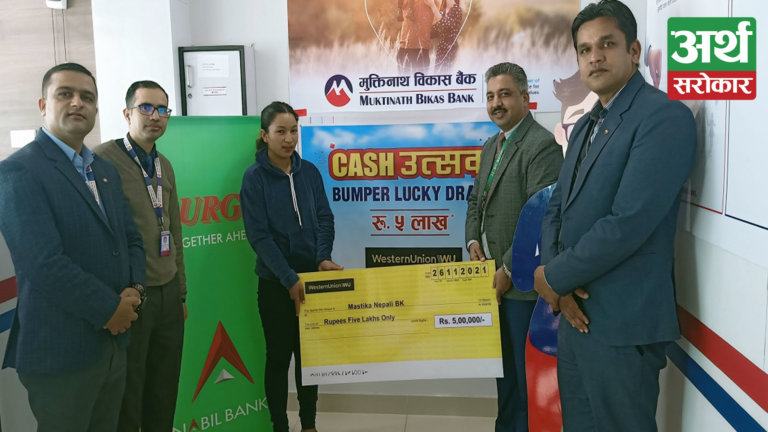 The promotion was launched in between September 17 and November 11, during the festival season of Dashain, Tihar and Chhath. 5 lucky customers also got a chance to win each NPR 20000 weekly for 8 weeks. All qualifying transactions during the promotion period were automatically entered in the Bumper Lucky Draw.

To qualify for the promotion, customers in Nepal were required to receive money through all agents of Western Union (ATT Remit, CG Finco, Hulas Remittance, Maya Remit, Nabil Bank, Surya Remit and Digitek Remittance) during the promotion period.

“I would like to congratulate all 41 winners of this Cashotsav promotion. I am thankful to all the customers who place their trust in Western Union to move their hard-earned money to their families in Nepal. This trust continually pushes us and our agents to provide solutions catering to different customer needs,” said S.S. Ramanathan, Senior Country Manager-Rest of South Asia, Western Union.

The Western Union Company (NYSE: WU) is a global leader in cross-border, cross-currency money movement and payments. Our omnichannel platform connects the digital and physical worlds and makes it possible for consumers and businesses to send and receive money and make payments with speed, ease, and reliability.

As of September 30, 2019, our network included over 550,000 retail agent locations offering our branded services in more than 200 countries and territories, with the capability to send money to billions of accounts. Additionally, westernunion.com, our fastest growing channel in 2018, is available in 75 countries, plus additional territories, to move money around the world. With our global reach, Western Union moves money for better, connecting family, friends and businesses to enable financial inclusion and support economic growth. For more information, visit www.westernunion.com.