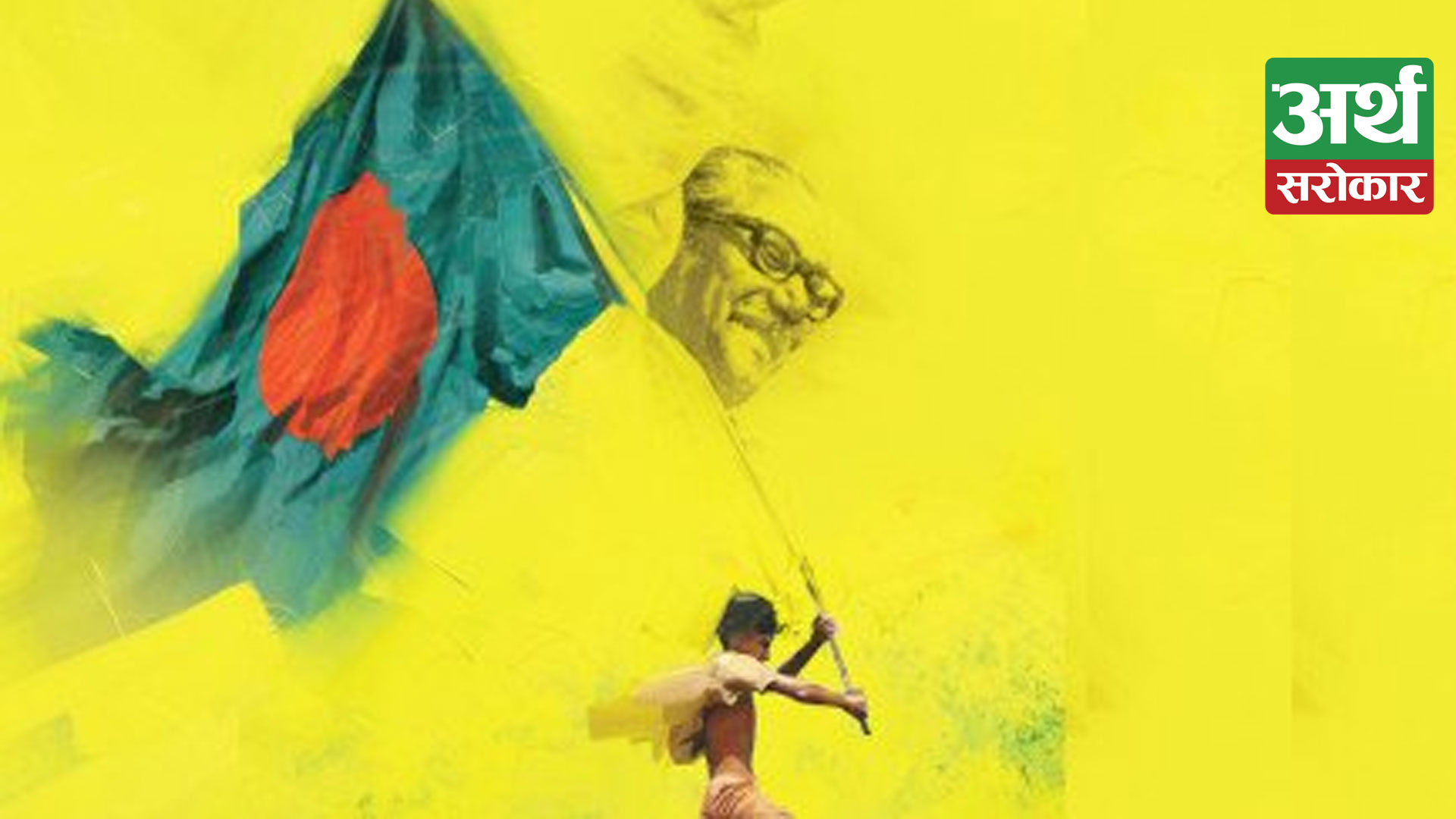 At the age of 50, Bangladesh is going to be a South Asian Economic miracle. Although Bangladesh (then East Pakistan) was the part of the Pakistan, it has already surpassed Pakistan in almost all socio-cultural and economic indicators. That is the attraction of global eyes including Pakistani media outlets. Pakistan has started to see Bangladesh positively.

Basically, rare praise from Pakistan is the highest recognition of Bangladesh. It is the valid truth that Bangladesh’s success story is indomitable. Appreciation by Pakistani media proves the statement.When your opponentpraises you, you should think that you are doing better.  Indeed, Bangladesh is now a prime example of a South Asian economic miracle. Many countries and international organizations are appreciating the economic rise of Bangladesh.Even Pakistani media are praising Bangladesh’s economic growth in their reports, editorials, opinions, etc.

Bangladesh celebrated its 50th founding anniversary. From the center to the village level, the festival was celebrated all over the country. Many discussed the successes and achievements of the country in their programs. Pakistani media outlets discussed the issue in their editorial and opinion pages. Among of these, five articles which have been published recently are very excellent. When national dailies publish something on some issues, it carries some important messages for the nation. Today, Pakistani media are praising Bangladesh. Rare appreciation from Pakistan is the recognition of Bangladesh’s success story.They are acknowledging the reality.

The Pakistani writer ShaziaAnwer Cheema who is an analyst writing for national and international media outlets. She heads the DND Thought Center. She writes in the prestigious Pakistani daily ‘Express Tribune’ in her write-up which was published on December 29 tilted ‘MIPs: can we learn from Nepal and Bangladesh?’ that Should we not look at Bangladesh and Nepal in our region? They have acquired tremendous benefits out of MIPs.MIPs report about Bangladesh says that Dhaka is on the right track to achieve middle-income expansion and integrating economic growth with social presence.

It is pertinent to mention that Sri Lanka’s well circulated ‘Daily News’ newspaper some excellent articles appreciating the Bangladesh’s economic achievement. By publishing the articles, Daily News wants to convey messages to the Policymakers and people of Sri Lanka that Sri Lanka should take lessons from Bangladesh. Sri Lanka should not loot at the remote. It can gain by following its neighbors ‘Bangladesh Model’. It is true that Sri Lanka can benefit from following the ‘Dhaka Model’.  An article written by Jubeda Chowdhury titled ‘Bangladesh’s Success Story: A worthy example’is the best example to understand it. Daily News published the article on December 28, 2021.

According to the article ‘Bangladesh has improved its quality of life, economic strength and prosperity, education and research in every field. And that is why in the past Bangladesh was said to follow the developed countries to move forward. Today the countries in Africa are being urged to look towards Bangladesh. No development in Bangladesh today is a surprise, but it is the result of systematic hard work. Today, Bangladesh is reaping the harvest of thousands of days of suffering of millions of people.’

Daily News also published the articles tiled ‘Bangladesh at 50: From ‘basket case’ to rising economic star’ (written by Leah Carter), ‘How Bangladesh became one of the fastest-growing economies’(written by Kamal Quadir) and ‘World can learn from Bangladesh’ (written by Pathik Hasan).

According to the last one, ‘Bangladesh got its independence from Pakistan in 1971. Born through the Great Liberation War from Pakistan in 1971, it inherited a shattered economy and a completely broken infrastructure. It was described as a hopeless economic disaster by many economic experts and world leaders such as Henry Kissinger of the US who called it a “Basket Case” in 1974. Nobody believed that it could survive economically as an independent country. Today the world is both surprised and delighted to see the phoenix rising from the ashes.’

One of the Pakistan’s leading dailies, the ‘Pakistan Today’ published an important and nice article on Bangladesh. The article written by Hafizur Talukdar tiled‘Bangladesh’s Assistance to Sri Lanka increases its image and prestige’ on December 27. The article praises Bangladesh’s economic growth impressively. According to this article ‘The image of Bangladesh and the respect for the people of this country has increased due to the assistance to Sri Lanka and Sudan from its foreign exchange reserves. Now the question is valid. Bangladesh is now a lending country! If Bangladesh can be a self-sufficient, lender, an economic miracle in South Asia, why can’t others do that? Why does South Asia not take lessons from Bangladesh? Of course, South Asia can learn a lot from Bangladesh’.

Dawn, One of Pakistan’s prestigious newspapers, published an article on December 16 (Day of Golden Jubilee of Bangladesh) titled ‘The Bangladesh Story’ . The widely circulated Pakistani daily ‘Dawn’ published an evaluative article by Israt Hossain. (Pakistani Prime Minister Imran Khan’s Former Advisor for Institutional Reforms and Austerity Ishrat Husain who served as the dean of the Institute of Business Administration, University of Karachi and the Governor of the State Bank of Pakistan).He once again worked in Dhaka, Chittagong and Patuakhali. He is well known to the socio-economic condition of Bangladesh. Not only that, he is also quite proficient in Bangla language. Several newspapers have published articles, editorials on the 50th anniversary of Bangladesh’s victory day.

It is the Pakistan’s defeat and Bangladesh’s victory. But this time, Pakistani media outlets start to understand that they are far lag behind from Bangladesh. According to the article,’ The Bangladesh story is an attractive one. How can a country so vulnerable to natural calamities outperform its much larger, better-endowed neighbors — India and Pakistan — in most socio-economic indicators?’ He showed the 6 fact-findings in his article why Bangladesh is moving forward such as cultural homogeneity with the same language, ethnicity, and a shared history and practically no religious, sectarian, tribal, and feudal divisions, the unitary form of government, women empowerment, a continuity in economic policies, projects, and programs despite having bitter political rivalries, efforts to liberalize trade, open its economy, bring in foreign technical know-how and provide generous cash and non-cash incentives to exporters, sustained high growth.

Pakistan’s another popular and leading daily ‘Pakistan Today’ (whose founding editor was Pakistan’s veteran journalist and minister ArifNizami) published an excellent article on December 24,written by Jubeda Chowdhury titled ‘Why and how Bangladesh is moving forward?’.Jubeda Chowdhury’s well-written article describes the pros and cons (a-z) of the economic growth model and system of Bangladesh. To understand the pace of economic growth of Bangladesh, I suggest all to read the article carefully.

According to the Jubeda Chowdhury’s article’ It is not surprising that the milestone of being a middle-income country by 2024 may be missed, but mega projects like Padma Bridge, Karnafuli Tunnel and Metro Rail starting from the Century Delta Plan show that the dream of Bangladesh to be recognized as a developed country by 2041 is to be realized. Not a very unrealistic thought. But it requires an uninterrupted development environment and strong leadership. And this is why the development management of Bangladesh has become a role model for underdeveloped countries in all development agencies including the United Nations and the World Bank.

Pakistan’s leading daily ‘The News International’ published also published an article on December 21 titled’ The West Pakistan Model’ written by Mosharraf Zaidi. In his article, he analyses and compares the Bangladesh Model of economic growth with the West Pakistan Model’. It is pertinent to mention that Pakistani magazine “South Asia” published a total of seven stories highlighting the success and achievements of Bangladesh and Prime Minister Sheikh Hasina in March.

Pakistan’s major English dailies – have published articles lauding the economic growth of Bangladesh. They said the country’s economy was booming under the leadership of its PM Sheikh Hasina. They felt Bangladesh was going to be the next South Asian economic superstar. They acknowledged Bangladesh’s tremendous effort to boost its economy over the past few years.

While the Pakistani media has been asking its government to follow Bangladesh’s model, it remains a sore point that Bangladesh -then East Pakistan, its eastern wing – was an exploited colony of Pakistan.