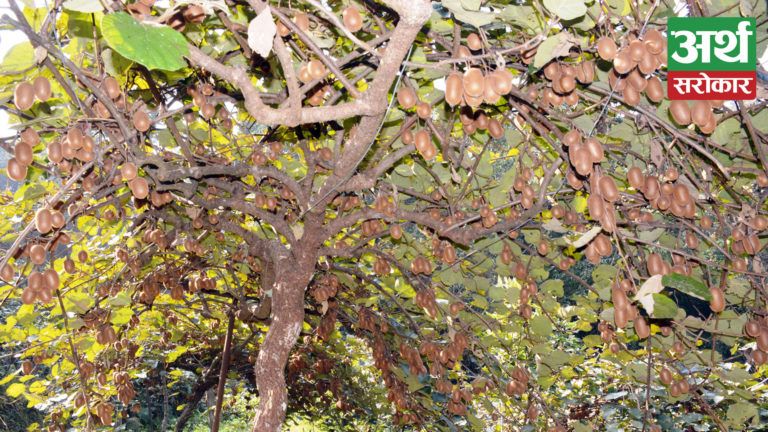 The farmers here have been worried over marketing of kiwifruit. Although they had begun the kiwifruit farming expecting good sale, they are now selling the produce at low price. Most of the farmers in the eastern belt of Taplejung district launched kiwi farming seven years back.
But, they are worried because of declining demand in market. A farmer from Pedang of Sirijung Rural Municipality-5, Khel Prasad Budhathoki, informed that there was currently almost no demand of kiwifruit. Most of the farmers began kiwi farming at the same time.
Nearly 1,000 quintals of kiwifruit is produced in the district at present. At a time when the kiwifruit is for sale, there is no market at all, Harkaraj Gurung from Phungling Municipality-6 shared plight. He demanded that local levels should provide assistance to the farmers in view of farmers’ plight. If there were cold stores, farmers would get some relief, Gurung added.
Bijay Dangi from Tiringe of Pathivara Yangbarak Rural Municipality-3 also expressed concern why all layers of government did not pay attention to the farmers’ problems. If the farmers’ concern is not addressed, they are on the verge of losing huge amount. Such disappointment among commercial farmer in the district is a bad omen, he observed.
In the beginning, the farmers could sell the kiwifruit at Rs 600, which has now declined to Rs 80 to 100. Even at such negligible price, all kiwifruit is not sold. Although farmers could reap huge benefit from the kiwifruit, lack of infrastructures as cold centres and market forced the farmers to sell the product at negligible price, Kumari Buddha Kangbang from Phaktangl