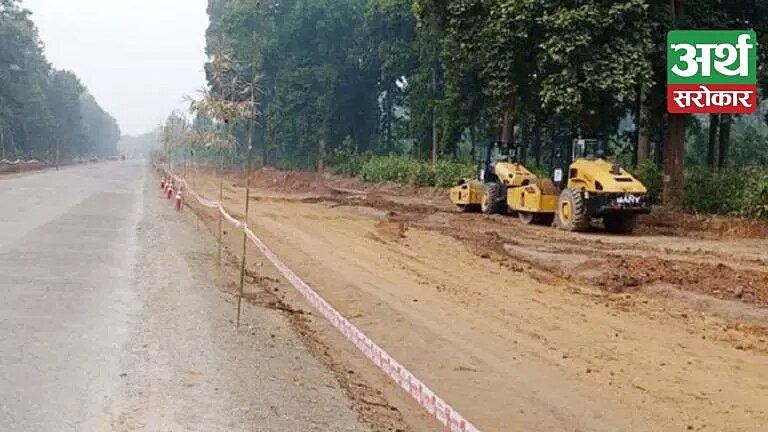 Trees are being cut down in an expedited manner along Tanahu section under Muglin-Pokhara road expansion drive. Tress along right and left side of the road at Tanahu section along Prithvi Highway are being chopped down.
Chief of Muglin-Pokhara road project (eastern section), Narendra Subedi, said that they have started to cutting down the trees along the road section under the project of expanding Muglin-Pokhara road to four-lane. Around 50 per cent trees along Jamune to Aanbukhaireni along the eastern section have already been chopped, he added. Subedi further said the project has been forwarded the activities to widen road. Out of 3,163 tress that should be chopped down along the Jamune-Pokhara section, 1,800 trees have been cut down so far. Activities to shift electric pole and removing huts would be carried out after cutting down trees.
A total of 6,750 trees should be cut down at Tanahu section in course of road expansion. The road project would hand over the trees to forest offices after chopping down, said Assistant Forest Officer at the Division Forest Office, Kashiraj Pandit. The road expansion project has been forwarded dividing it into two section—Jamune-Aanbukhaireni and Jamune-Pokhara.
The map of this road was prepared in 1969. It is being expanded to a four-lane highway with the assistance of the Asian Development Bank (ADB) due to the high traffic. Prithvi Highway that links Kathmandu and Pokhara was built with Chinese assistance and was completed in 1974. Being one of the busiest highways in the country, it faces frequent traffic jams.
The highway traffic is expected to ease once the project is completed. The expansion of the 80-kilometre road is contracted out by dividing it into two sections