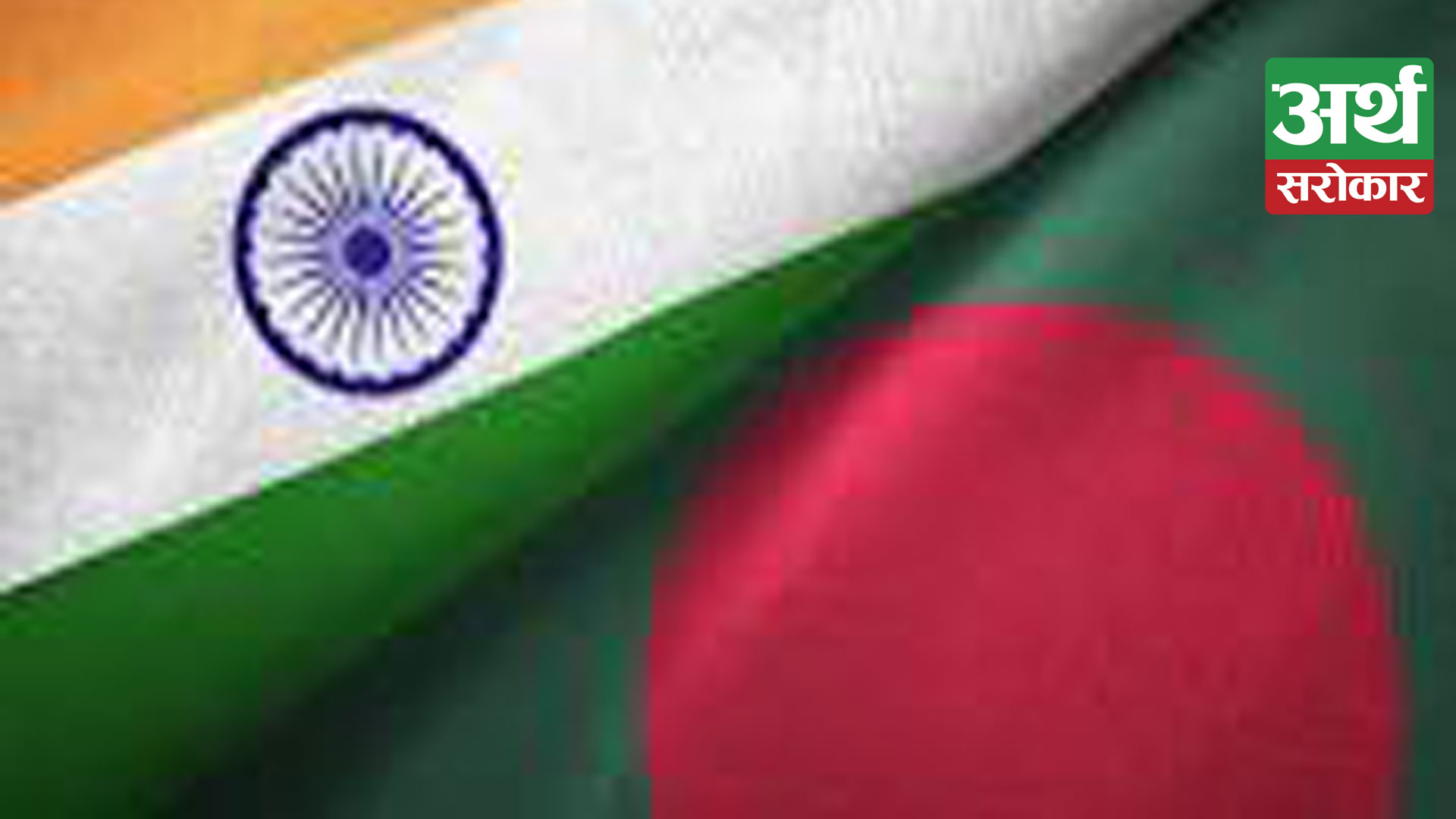 Bangladesh is one of the India’s largest trade partner in the region. Trade Volume is increasing day by day. Even, the bilateral trade between the two countries grew at an unprecedented rate of 14 per cent during the COVID-19 pandemic. Media reports said that despite the COVID-19 pandemic, bilateral trade was at an unprecedented rate of 14 per cent from 9.46 billion US dollars in 2019 to 10.78 billion dollars in 2021.

Bangladesh mainly exports products including readymade garments, jute and jute-processed products, leather-processed products, plastic products, fish, soft drinks, copper and edible oil while goods including rice, raw cotton, onion, motor vehicles, boilers, machinery, milk, dairy products, electronic products and iron were imported from India. There is huge potential to increase the trade Volume between Bangladesh and Indian. There is a huge demand of Indian products in Bangladesh. On the other hand, the demand of Bangladeshi products is increasing day be day. Now Indian consumers want to consume Bangladeshi products. Border markets are the best example to understand it.

According to media reports, India exports to Bangladesh was US$7.91 Billion during 2020 (United Nations COMTRADE database on international trade). In the last one year, Bangladesh-India trade has increased by 94%. At the end of the current financial year, Bangladesh’s exports to India are expected to reach 2 billion for the first time. India is keen to take this trade relationship to a new height.

Bangladesh’s stable economic development is creating new opportunities for India’s northeastern states and work on a CEPA trade agreement is ongoing. The two countries are celebrating 50 years of India-Bangladesh friendship and India’s President Ram Nath Kovind completed a successful visit to Bangladesh last year.
2021 marks the golden jubilee of the liberation of Bangladesh and fifty years of India-Bangladesh diplomatic ties. India’s President Ram Nath Kovind is currently on a three-day state visit to Bangladesh from December 15 to 17, 2021; this is his first state visit since the outbreak of the COVID pandemic.

Speaking on the state of bilateral ties in November, India’s Defense Minister Rajnath Singh affirmed that India Bangladesh relations are going through a golden phase. As Bangladesh attains “developing nation” status (upgrading from “less developed country” status), India has reiterated its commitment to deepen trade and economic ties with Bangladesh as partners rather than competitors. That Bangladesh is India’s biggest trade partner in South Asia, with a volume of over US$10 billion, is testimony to this commitment. In the same pursuit, both countries are working to finalize a Comprehensive Economic Partnership Agreement (CEPA).

Economic and commercial partnership between India and Bangladesh
According to various Indian and Bangladeshi media reports, Bangladesh may become India’s fourth largest export destination in FY22, jumping five places in two years. This comes as the economic boom of the eastern neighbour continues to fuel India’s exports growth.Indian media outlet ‘Business Standard’ wrote last year that the first seven months of FY22, exports to Bangladesh grew 81 per cent over the same period in the preceding year to $7.7 billion. This makes it India’s fourth largest export market behind the US, UAE and China.

The two countries now should concentrate on people-to-people contact, trade, business and connectivity as the issues became increasingly important for the two sides. India could be a major supplier of yarn and cotton to the garment industry in the near future.A deeper economic and trade engagement becomes all the more relevant, given the success of phenomenal and uninterrupted supply chains during the pandemic. An augmented connectivity infrastructure is imperative to actualize the bilateral trade and investment potential between the two countries. India’s Commerce and Industry Minister Piyush Goyal has recognized five focus areas to bolster bilateral economic ties – technology, connectivity, entrepreneurship, health, and tourism. Bangladesh is also important for aiding India’s connectivity in the Southeast Asian region through Chittagong and Mongla ports.

Indian and Bangladeshi companies signed agreements worth nearly $10 billion for Indian investment, mainly in the power and energy sectors, during a visit of Prime Minister Sheikh Hasina to India in April 2017. And with Indian economic zones coming up at Mongla and Mirsarai, the amount of FDIs from the neighbouring nation is bound to increase manifold. Both India and Bangladesh are also working towards holding the first meeting of the India Bangladesh CEOs Forum to provide policy level inputs in various areas of trade and investment and also to facilitate exchanges among the business communities of both the countries. Additionally, a bilateral textile industry forum has also been constituted to facilitate cooperation in the textile sector.

According to the data of media outlets, With Bangladesh being the central pillar of India’s Neighbourhood First policy, Dhaka is New Delhi’s largest trade partner in South Asia and bilateral trade between the two countries grew at an unprecedented rate of 14 per cent during the COVID-19 pandemic. the COVID-19 pandemic, bilateral trade was at an unprecedented rate of 14 per cent from 9.46 billion US dollars in 2019 to 10.78 billion dollars in 2021. Joint energy space is steadily emerging, India and Bangladesh’s electricity grids are interconnected from east and west with more than 1160 megawatts of powers way across from India and Bangladesh.The ₹346 crore Pipeline Project, signed in 2018, will connect Siliguri in West Bengal in India and Parbatipur in Dinajpur district of Bangladesh. The work on the India-Bangladesh Friendship Pipeline, a project that will enable the two countries to integrate their energy needs, is progressing well and could be inaugurated next year. ( The NDTV, the Hindu, Foreign Secretary Harsh Vardhan Shringla )

Despite COVID-19 restrictions, the trade between India and Bangladesh crossed $10 billion. . India had sent over one crore COVID-19 vaccines to the country and has extended concessional credit lines of about $8 billion, the highest for any single country. India is also developing two Indian economic zones at Mirsarai and Mongla. Prime Minister Narendra Modi’s invitation to 50 young entrepreneurs from Bangladesh will further augment our ties. Over 350 Indian companies are now registered in Bangladesh. The India-Bangladesh CEO Forum will meet soon for the first time, even as the two countries work towards finalising a Comprehensive Economic Partnership Agreement (CEPA) to deepen trade and economic ties as partners rather than competitors.

India stands “shoulder to shoulder” with the country’s leadership and people in their development journey. Noting that India-Bangladesh supply chains worked uninterrupted through the pandemic, Improving connectivity is “imperative” for expanding and realising the potential for bilateral trade and investments. The two countries’ leaders have brought Delhi and Dhaka closer and can together bring economic prosperity to South Asia. ( The Hindu, Commerce and Industry Minister Piyush Goyal) India and Bangladesh have signed a Memorandum of Understanding (MoU) for the construction of a high-speed diesel pipeline from Nonmilitary in Assam to Parbatipur in Bangladesh, a joint venture between Numaligarh Refinery Limited and Bangladesh Petroleum Corporation. As an indication of goodwill, an initial consignment of 2200 ton of diesel has already been transported from Siliguri in West Bengal to Parbatipur in 50 wagons by the Indian Railways

Furthermore, India-Bangladesh cooperation in the power sector too has become an important aspect in this bilateral relationship. Bangladesh is currently importing 1160 MW of power from India. The Joint Working Group (JWG)/Joint Steering Committee (JSC) on power provides an institutional framework to promote bilateral cooperation in cross border trade of electricity.

How is India aiding Bangladesh as a development partner ?
Presently, Bangladesh remains India’s biggest development partner. Over the past eight years, India has extended three Lines of Credits (LOC) to Bangladesh, amounting to US$8 billion for development of infrastructure in various sectors, including roads, railways, shipping, and ports. Additionally, India has also been providing grant assistance to Bangladesh for various infrastructure projects, including construction of Akhaura-Agartala rail link, dredging of inland waterways in Bangladesh, and construction of India-Bangladesh Friendship Pipeline.