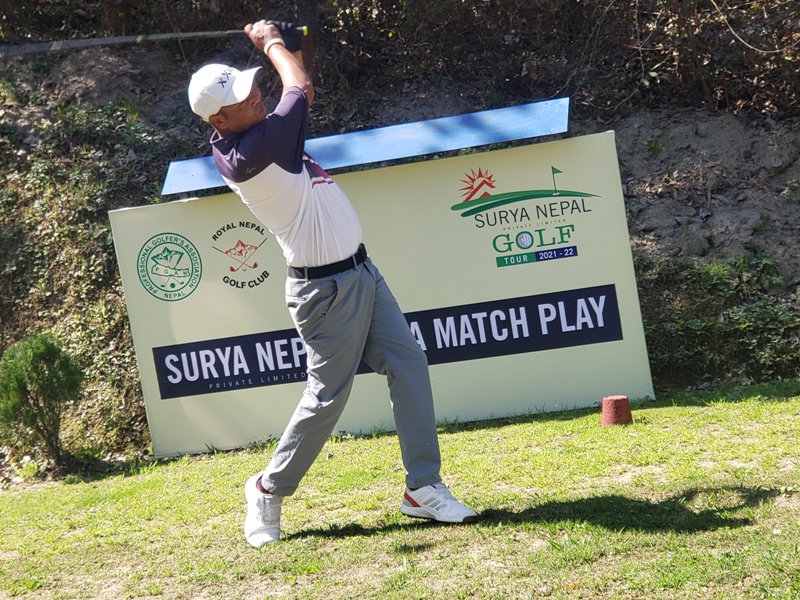 Nepal No 1 pro Bhuwan Nagarkoti advanced to the quarter-finals of the Surya Nepal NPGA Match Play, the fourth event under Surya Nepal Golf Tour 2021-22, at the Royal Nepal Golf Club on Tuesday. Top-ranked Bhuwan defeated 18th-ranked Sachin Bhattarai 6/4 in the first round. Bhuwan also became the biggest winner of the day as he was 6-up with four holes remaining. He will next play against ninth-ranked Dinesh Prajapati, who beat 10th-ranked Surya Prasad Sharma 3/2.

Top 16 professional golfers in the Order of Merit of Surya Nepal Golf Tour 2018-19 season were eligible to participate in the tournament. Second-ranked Shivaram Shrestha and 14th-ranked Deepak Acharya did not take part in the tournament allowing 17th-ranked Shiva Kumar Majhi and 18th-ranked Sachin Bhattarai to take their places. No 3 Bikash Adhikari, No 4 Sanjay Lama, No 5 Dhana Bahadur Thapa, No 6 Rame Magar, No 7 Jayaram Shrestha and No 10 Deepak Magar also advanced to the quarter-finals. Third-ranked Bikash Adhikari defeated Shiva Kumar Majhi, while fourth-ranked Sanjay Lama beat No 15 Ram Krishna Shrestha with identical scores of 5/4. Fifth-ranked Dhana Bahadur Thapa beat No 13 Bal Bhadra Rai and sixth-ranked Rame Magar edged past Bhuwan Kumar Rokka in the final hole.Winner of the season-opening event, Surya Nepal Kathmandu Open, Jayaram Shrestha outplayed No 12 Krishna Man Rajbahak 5/4, while No 11 Deepak Magar upset eighth-ranked Rabi Khadka on the second extra hole after they were tied on regulation 18 holes. Four quarter-finals and two semi-final matches will be played on Wednesday.

The third-place match and final will be played on Thursday. All other matches are played over 18 holes, while the finalists will compete in a 36-hole contest. The tournament, organised by Nepal PGA under the sponsorship of Surya Nepal Pvt Ltd, carries a cash purse of Rs 200,000. Top four pros will receive Rs 50,000, Rs 30,000, Rs 22,000 and Rs 18,000 respectively. Four losing quarter-finalists will get Rs 10,000 each, while the eight pros who lost in the first round will get Rs 5,000 each.