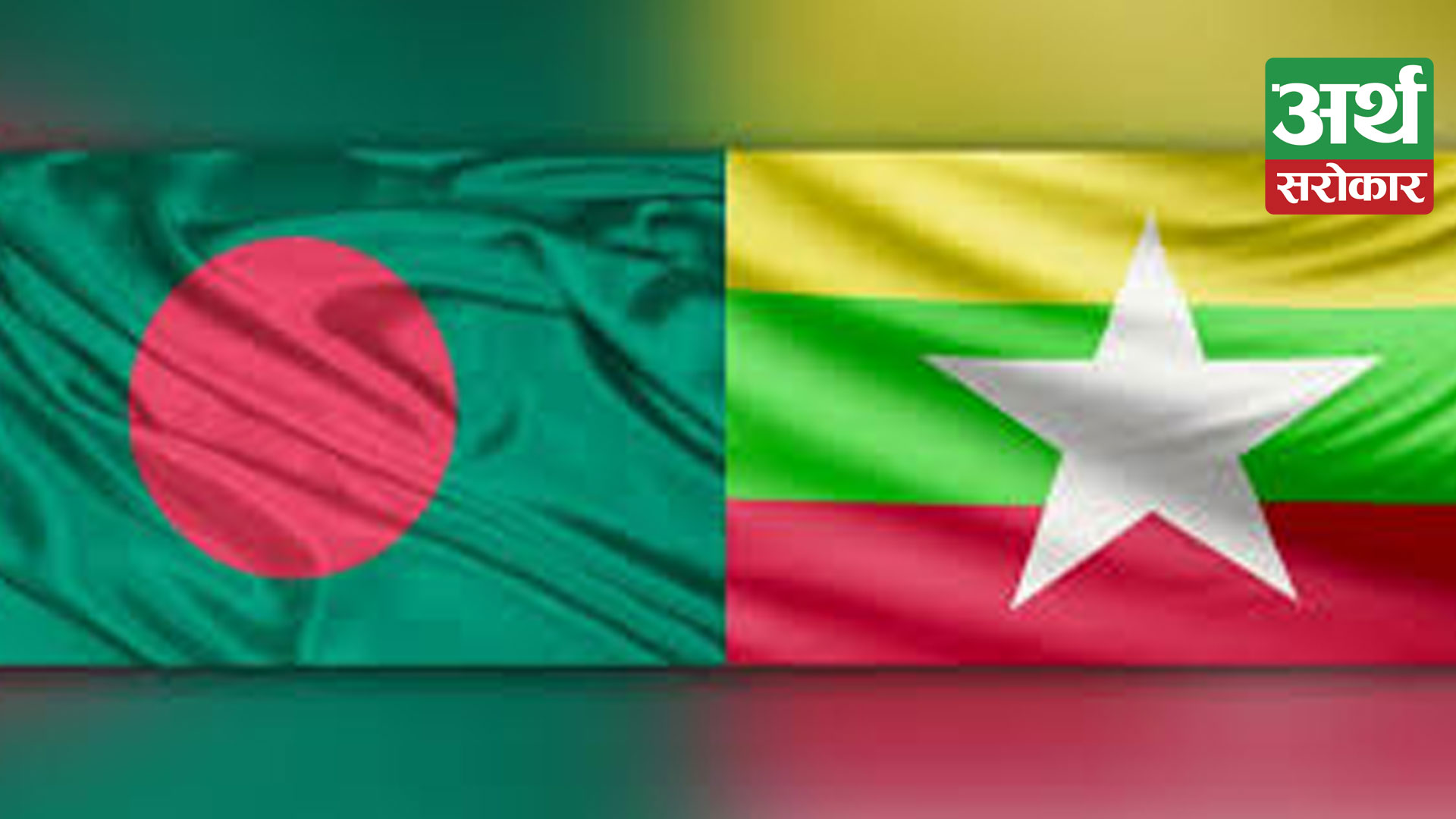 Bangladesh and Myanmar share a land boundary of 271 kilometers. Prior to their establishment as contemporary nation states, both countries had a long history of exchanging political, cultural, and economic concerns. They also share a common history of British colonialism. The relationship between these two countries is based on demography rather than geography. Since Bangladesh’s 1971 independence from West Pakistan, the two countries have had “cordial” relations. One of the first countries to acknowledge Bangladesh was Myanmar. However, due to the Rohingya crisis and border disturbances, Bangladesh-Myanmar ties have turned tense at times.

Despite the persistence of certain topics of contention and the resulting Luke-Warm bilateral ties, Bangladesh and Myanmar had a fairly active cooperation process. Aside from bilateral collaboration, the two countries are strengthening cooperative links through a number of regional and sub-regional organizations and initiatives. Bangladesh and Myanmar are founding members of the Bay of Bengal Initiatives for Multi-Sectoral Technical and Economic Cooperation, a sub-regional association (BIMSTEC). Both countries are also part of the Track-II Kunming effort, often known as BCIM, which comprises Bangladesh, China, India, and Myanmar.

Bangladesh is also working to strengthen its formal connection with the Association of Southeast Asian Nations (ASEAN), which Myanmar is a member of Bangladesh has already joined the ASEAN Regional Forum (ARF) and is pursuing an ASEAN dialogue relationship. Despite both nations’ consistent efforts, the progress of Bangladesh-Myanmar ties has been clouded at times by controversial problems. The following are the main issues of bilateral relations in this context:

Though political and economic ties between countries in the Eastern South Asia subregion have improved since the 1990s, the Rohingya issue has frequently disrupted ties between Burma (Myanmar) and Bangladesh. The Rohingyas are a Muslim ethnic minority who live in the Buthidaung and Maungdaw Townships in the Arakan State of Burma’s northwestern region. The Mayu region is located near to the Naaf River, which serves as a border with Bangladesh. They make up the majority of the population, together with Buddhist Arakanese and Burmese. The number of the Rohingyas is unclear because no proper census has ever been done.

Their citizenship was officially denied by the Ne Win government in 1974. Due to Myanmar army’s Operation Dragon King in 1978, over 200,000 members of this ethnic group fled the country. Bangladesh and Myanmar resolved to resolve the issue in 1978 via a 1978 accord. However, the total number of Rohingya refugees in Bangladesh has always been a point of contention between Bangladesh and Myanmar. According to the various open sources, there have been living more than 1 million Rohingya refugees in Bangladesh temporarily. The region could see the holistic sustainable solution of this long pending crisis between Myanmar and Bangladesh if Myanmar accommodates a sophisticated holistic and pragmatic ‘Bangladesh policy’ based on friendship and neghbouhood.

Myanmar, with the help of the international community, was able to return almost all of the Rohingya refugees who had fled to Bangladesh in 1978-79. However, about 250,000 Rohingyas migrated to Bangladesh to escape persecution in 1991 and 1992. 5After disturbances pitting Buddhists against Muslims in Myanmar’s Rakhine province, a huge number of Rohingyas attempted to enter Bangladesh in June 2012. More than 0.7 million Rohingya Muslimshave been living in Bangladesh since 2017, causing the situation to deteriorate.The crisis forced over Rohingyas to flee to other countries. Most fled to Bangladesh, resulting in the creation of the South Asia and Southeast Asia’s largest refugee crisis.

It is vital to note that the Rohingya problem remains the most contentious political issue between the two countries. In this regard, Bangladesh’s approach should be to link up the Rohingya situation to regional security concerns, as well as how a peaceful border can boost bilateral friendship and goodwill. After the ruling of the International Tribunal of the Law of the Sea on March 14, 2012, the long-running maritime dispute between Bangladesh and Myanmar came to a conclusion. In the Bay of Bengal, Bangladesh got 111000 square kilometers of exclusive economic zone. Bangladesh was also given a 12-mile territorial sea around St. Martins Island by the Tribunal. It’s a win-win situation for both countries. Order can boost bilateral friendship and goodwill.

Bangladesh and Myanmar share a land boundary of 271 kilometers. An effective and cooperative management of the common border is required to achieve a stable bilateral relationship. When the Myanmar government began fencing 40 kilometers of border in 2009, the Bangladesh government expressed reservations about the project. Following that, both countries agreed that “the erection of the barbed wire barrier will have no impact on bilateral relations.” Myanmar constructed 40 kilometers of fencing in 2011.

The Bangladesh Department of Narcotics Control has identified the Myanmar border region as a major entry site for illegal drugs into Bangladesh. The Rohingya are used as transporters, middlemen, and traffickers. Bangladesh’s security is threatened by some armed organizations led by Rohingya Muslims. The Arakan Rohingya Islamic Front (ARIF), Rohingya Solidarity Organization (RSO), Rohingya National Alliance (RNA), and Arakan Rohingya National Organization (ARNO) are among the prominent groups posing a security danger to Bangladesh. Myanmar has also same security threat. Both states can work together in combating those non-traditional security threat.

In the depths of the Chittagong Hill Tracts, somegroups frequently coercelocal communities into planting poppy. Arms and drug trafficking have now become major concerns along the Bangladesh-Myanmar border. For border stability and peace, the countries must preserve this unlawful networking. The bilateral trade between the two countries is also improving. During the fiscal year of 2011-2012, Bangladesh exported goods to Myanmar worth US $ 13.45 million and imported goods worth $ 65 million. In the 2012-2013 fiscal years, the average amount of border trade was US $ 6.3 million.

The export value was $6.2 million, while the import value was $87 million. Despite the limited amount of trading, the potential is enormous. Despite the fact that the trade balance between the two countries favors Myanmar because Bangladesh imports many food items from the neighboring country, the trade gap is expected to narrow as Myanmar begins to import new materials from Bangladesh in early 2012, following Bangladesh Prime Minister Sheikh Hasina’s visit to Yangon in late 2011.

Connectivity is generally regarded as a crucial aspect of bilateral collaboration. Since 1988, the Myanmar government has prioritized physical infrastructure development to bolster the economy through state monopoly. The situation has evolved over time due to a lack of foreign exchange reserves. The power and communication sectors remained state monopolies, but road transport was given to private enterprise.

The current state of Bangladesh-Myanmar ties is extremely delicate. There is no doubt that bilateral issues arise out of national interest and national security considerations. The Rohingya refugee crisis in Bangladesh, in particular, has become a national security danger. Myanmar is to blame for the influx of Rohingya IDPs and refugees. As a result, it is Myanmar’s responsibility to make appropriate decisions in accordance with international law and standards in order to mitigate this issue. Bangladesh is not obligated to bear the brunt of the Rohingya refugee crisis. To tackle this challenge and enrich bilateral relations with Myanmar, Bangladesh requires a robust diplomatic movement.Myanmar also Should Have ‘Friendship and Neighbourhood policy to Bangladesh.