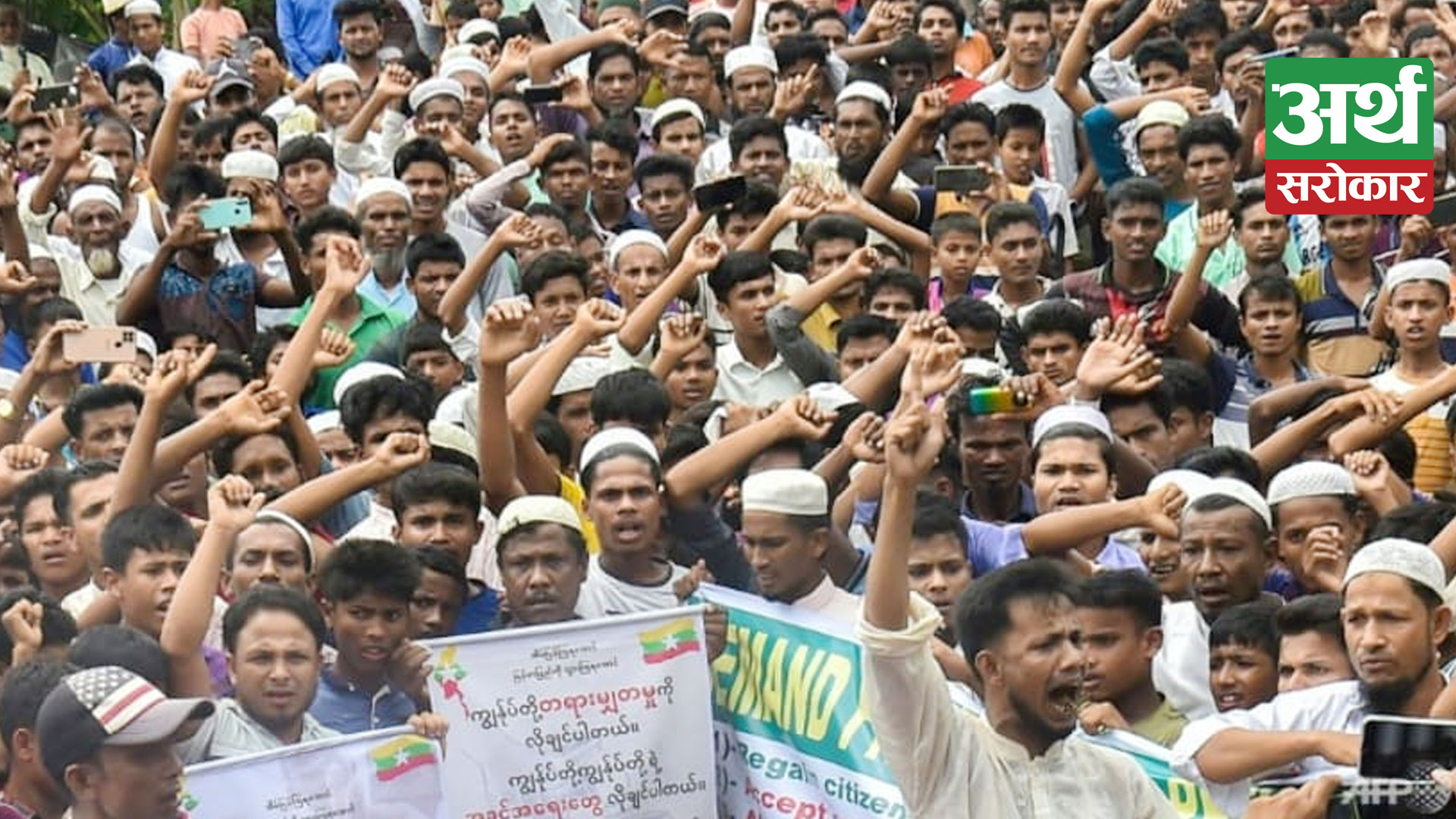 International media attention has returned to Rohingya refugee repatriation to Myanmar from Bangladesh this week following a news.On Sunday (June 19 2022), tens of thousands of Rohingya refugees protested in Bangladesh, demanding their repatriation to Myanmar, where they fled a deadly military crackdown five years ago. Thousands of Rohingyas joined a peaceful march in front of the Balukhali 18 camp in-office charges on June 19, 2022, brandishing the Myanmar national flag, placards, and festoons with various demands.The demonstration was held on the first day of the “Let’s Go Home” (Bari Cholo) campaign, which was launched in 23 camps – 21 in Ukhia and two in Teknaf upazila. Five years on from the horrors of 2017, 600,000 Rohingya continue to suffer at the hands of the military. While neighbouring states host large numbers of refugees – in particular, Bangladesh, which is hosting over a million refugees.

The Rohingya people who remain in Rakhine State continue to face systematic discrimination, they are denied citizenship, and they have no access to education and healthcare. So, there is an urgent need for reform of discriminatory legislation, which creates this permissive environment for atrocity and crime. The military coup in Myanmar on 1 February 2021 has raised fears in neighboring Bangladesh that the new regime may not honor commitments to repatriate Rohingya Muslim refugees currently in Bangladesh.Myanmar government has been very reluctant to take back their nationals, the Rohingya, despite the robust diplomatic endeavors of the Bangladesh government regarding repatriation. Despite Bangladesh’s sincere efforts, Rohingya repatriation could not be started in more than three years after some 750,000 Rohingyas fled a brutal military crackdown in Myanmar’s Rakhine State. The reality suggests that the presence of about a million Rohingyas in limited space has become risky. It left the local livelihood, environment and socio-economic situation under threat.There were also security challenges in the crowded camps.

Five years on, there is an urgent need for international action to take back the Rohingyas in their homeland. Myanmar military can’t remain silent in this regard. They think that world and international community would forget their misdeed and the plight of the Rohingyas. Covid-19, Ukraine crisis and Afghan crisis make Myanmar military to some extent reluctant to this issue because international focus has shifted towards the crisis. But this time, Rohingyas started to raise their voice against the injustice they are facing. Though Myanmar does not accept them as citizens, it wants to take certain some steps to lessen international pressure. Bangladesh is bound to comply despite being aware of the real picture. Myanmar played tricks to hold Bangladesh accountable for not being able to start repatriation. It wants to show that the UNHCR that it has undertaken extensive activities for repatriation and this had not been an entire failure.

Myanmar military has managed to fool the whole world so far. The international community, despite being humanitarian and being friends of Bangladesh, has failed to take any effective steps. Myanmar still is in the position where it was five years ago regarding the military operations in Rakhine. It was hoped that the common friends of the two states including China, India and Russia will solve the issue but no effective efforts are in the sight so far. No demands seeking a change in Myanmar’s stance have so far appeared in any international media. Myanmar military itself is completely silent on the issue of Rohingya citizenship. Though a number of states imposed a limited embargo on the generals of Myanmar, such efforts have already been proved useless. Human rights organisations too are inert when it comes to the criminals in Myanmar. Myanmar wants to create an illusion before the world that despite a delay they finally have started repatriation.

It has a great symbolic value for them. The UNHCR, chiefly, must now inform the world that the responsibility of foiled initiative lies with Myanmar due to its trickery. Myanmar does not want to take back the Rohingyas, but it wants the Rohingyas to take the responsibility for it. Myanmar must not be allowed to succeed in this cunning manipulation. Now time has changed, world knows the real scenario. Rohingyas are very vocal to go back to their homeland Myanmar. Myanmar military can’t deceive anymore. Thus, it would be better for the Myanmar military to take back the Rohingyas because Rohingya issue gets new attention from the international community. Almost one million Rohingya Muslims are confined to bamboo and tarpaulin shacks in 34 filthy camps in southeast Bangladesh. Thousands of Rohingyas organized a peaceful rally in Ukhia, Cox’s Bazar on June 19, 2022 to tell the world especially Myanmar military that they want to return to Myanmar, a day before World Refugee Day.

They also distributed pamphlets outlining their seven-point demand, which includes the immediate repatriation of Rohingyas to Myanmar, the repeal of Myanmar’s 1982 citizenship act, ensuring the dignity and security of Rohingyas in Myanmar, and the end of Myanmar’s persecution of innocent people. Rohingyas are telling now that they’re doing good here (in Bangladesh). They owe Bangladesh and its people an inexhaustible debt of gratitude. However, they wish to return to their homeland. They wish to go back to their hometown as soon as possible. Since staging a big 100,000-strong protest in August 2019, the host government has barred them from holding rallies for security reasons.However, ahead of World Refugee Day on Monday, authorities authorized numerous groups of Rohingya to organize simultaneous “Go Home” marches and rallies.

According to media reports, “They don’t want to stay in the camps,” said the group. Being a refugee is difficult. It’s a living hell. It’s time to stop. In a speech at one demonstration, leading Rohingya community leader Sayed Ullah declared, “Let’s go home.” A United Nations fact-finding mission examining the killings and forced mass migration of Rohingya Muslims in Myanmar recommended in 2018 that top Myanmar generals should be investigated and prosecuted for crimes against humanity and genocide.The demonstrations on June 19, 2022, came after Bangladesh and Myanmar’s foreign secretaries met via video conference on June 14, 2022, for the first time in nearly three years. During the discussion, Dhaka asked Naypyidaw to begin repatriating Rohingya refugees this year, according to media report.Thousands of refugees, including young children, took part in the marches and demonstrations, police claimed, holding signs that read “Enough is Enough!” on highways and lanes. “Let’s get out of here.”Over 10,000 Rohingya participated in the rally in the camps. More than 1,000 Rohingya participated in each of the rallies in at least 29 camps, according to police and organizers.

Previous attempts at repatriation have failed, with the Rohingya refusing to return until Myanmar provides guarantees of rights and security to the predominantly Muslim minority. Many in Myanmar regard the Rohingya, who speak a dialect similar to that of Chittagong in southeast Bangladesh, as “illegal immigrants,” a label that the minority rejects. Rohingy as, say they want to return to their own communities in Myanmar’s Rakhine state, not to the government-built camps for internally displaced persons.”We are not Bengalis; we are Rohingya.” “We want full rights restored and repatriation. They do not want to “die a refugee.”we want to be able to exercise my rights.” ” we want to go home and study and plan for the future,” The 20th of June is World Refugee Day. The Rohingyas from nearly every camp in Ukhia and Teknaf, want to inform the world — through peaceful rallies – that the Rohingyas are Myanmar citizens. Arakan State (now Rakhine State) is where they were born. They want to go back to their native country.”

June 19 and 20’s campaign program, “The Rohingya people want to return to Myanmar and remind the world of their rights. The Rohingyas organized this rally to express their message. According to the RRRC office’s most recent figures, there are currently roughly 890,000 Rohingya living in 34 camps.The total number of Rohingyas in Bangladesh, however, is 1 million. There is huge international pressure on Myanmar military now regarding democratic movements following 2021 coup and Rohingya refugee issue. Myanmar military could benefit ultimately if it takes initiative to repatriate Rohingyas in its land. Myanmar should resolve the crisis with its neighbour, Bangladesh as soon as possible for ensuring regional stability. Otherwise, it could occur disaster for the Myanmar military. Myanmar wont’ be able to bear international immense pressure. If Myanmar resolves the crisis, Myanmar could benefit from resolving the crisis with Bangladesh bilaterally through cementing trade ties. Thus, it’s a Myanmar military’s own interest to resolve the crisis as soon as possible. Message is clear that Rohingya refugees don’t like to stay Bangladesh anymore as refugees and tolerate the injustice committed by Myanmar military. It’s time to take back the Rohingyas in Myanmar, this is the clear example of the Rohingyas to the Myanmar military government through this massive rally.