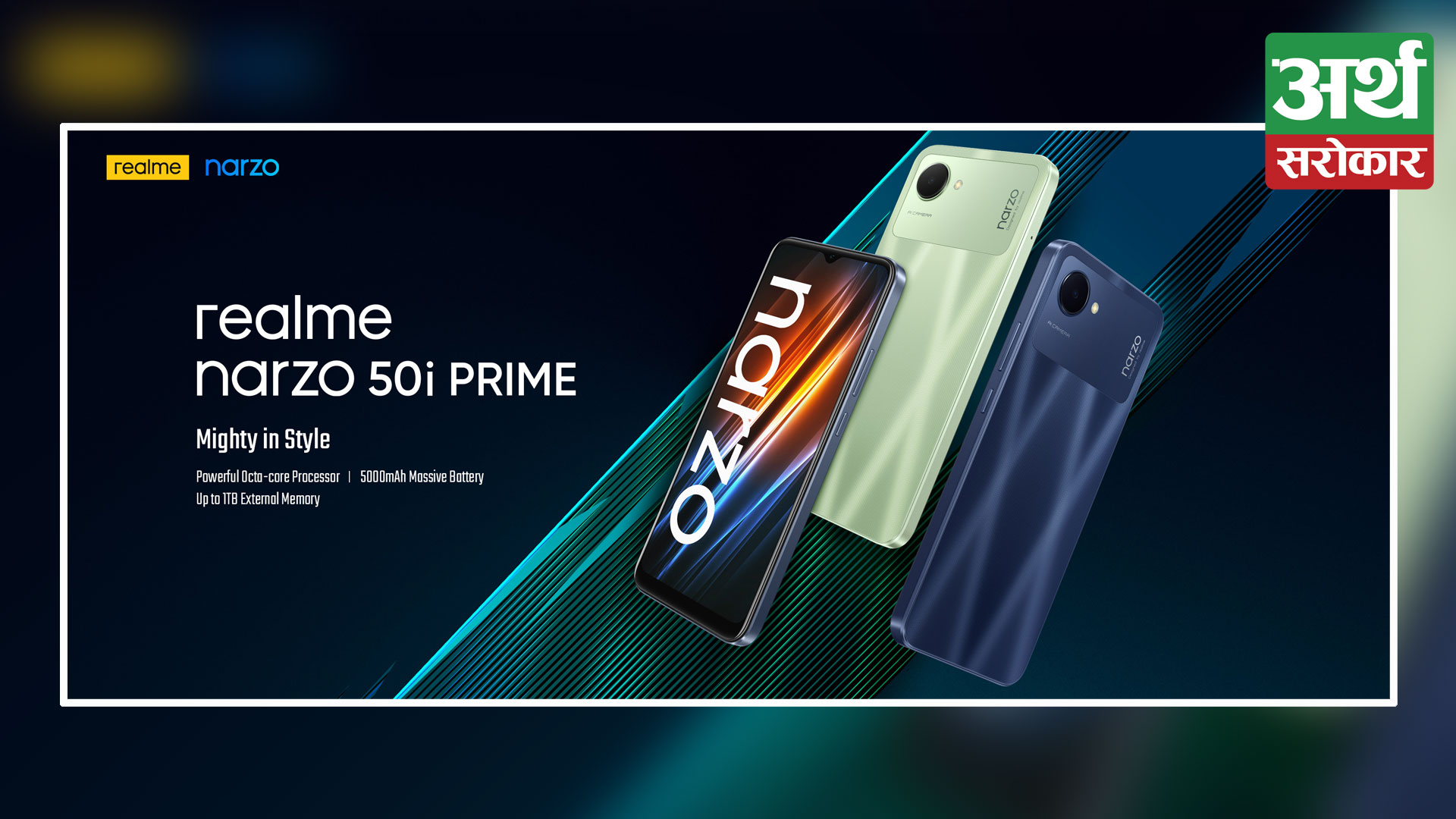 Realme, the world’s fastest-growing smartphone brand, today introduced a new addition to its narzo family – realme narzo 50i Prime, the most stylish entry-level all-rounder. The smartphone comes with numerous features and will take forward the narzo legacy of stylish design, strong performance, and powerful processor and will provide a holistic user experience.

Commenting on the launch, Mr. Munish Giri, Country Head – realme Nepal said, ‘We are thrilled to unveil the newest member of our narzo series, realme narzo 50i Prime. The narzo series is highly well-received by users in Nepal, especially the gaming crowd, and this gave us the confidence and motivation to step further and cover the wider demand of our users. narzo 50i Prime, the most stylish entry-level smartphone, comes with a new vertical stripe design and will deliver the best performance in the segment with its UNISOC T612 Powerful Processor. Realme, as a brand, always aims to bring the newest features to all of its smartphones, and realme narzo 50i Prime is another smartphone that aids realme in stepping ahead with its design and newest technology.’

Realme narzo 50i Prime, the most Stylish entry-level all-rounder smartphone is crafted to provide users with an unrivaled experience. It is an 8.5mm Ultra Slim smartphone, one of the thinnest & lightest smartphones in the price segment weighing just 182 grams. realme narzo 50i Prime comes with a new Vertical Stripe Design to provide a visual experience with a comfortable feel to users. It is powered by a Unisoc T612 Powerful Processor, scoring 209,832 on AnTuTu benchmarks which is one of the best in the segment, with an octa-core 12nm processor that clocks up to 1.82 GHz. The smartphone features UFS 2.2 high-speed flash storage that can provide users with 3 times faster data read and write speed.

It is equipped with an 8MP AI camera, letting users capture more details in their images and take blockbuster shots with ease. The smartphone also has a massive 5000mAh battery that allows users to enjoy nonstop activity and lasts up to 45 days on standby. realme narzo 50i Prime will be available in two eye-catchy colors – Dark Blue and Mint Green and will come in two storage variants 3+32GB priced at Rs 14,499 and 4+64GB priced at Rs 15,999 respectively.

Design: realme narzo 50i Prime is the most stylish entry level phone featuring a new Vertical Stripe Design which is a subtle arrangement of well-ordered textures that reflect the elegance of stripes. It is one of the thinnest smartphones in the price segment, sporting an 8.5mm Ultra Slim body and weighing 182 grams, offering a comfortable in-hand feel to users.

Processor: The realme narzo 50i Prime features a Unisoc T612 powerful processor, which is the best processor in the segment. It comes with 20,98,32 AnTuTu score benchmarks and delivers a powerful performance experience.

It has an octa-core 12nm processor that clocks up to 1.82 GHz and adopts Cortex A75 structure which brings powerful and stable performance to the smartphone. It also features an UFS 2.2 high-speed flash storage flash technology that can provide 3 times faster data read and write speed than eMMC 5.1.

Battery: The realme narzo 50i Prime has a large 5000mAh battery that allows for 102 hours of audio playback. When left on standby, the smartphone can last for up to 45 days on a single charge.

Storage & color variants: The realme narzo 50i Prime will be available in two storage variants – 3GB+32GB and 4GB+64GB, and will come in two amazing colors – Dark Blue and Mint Green .